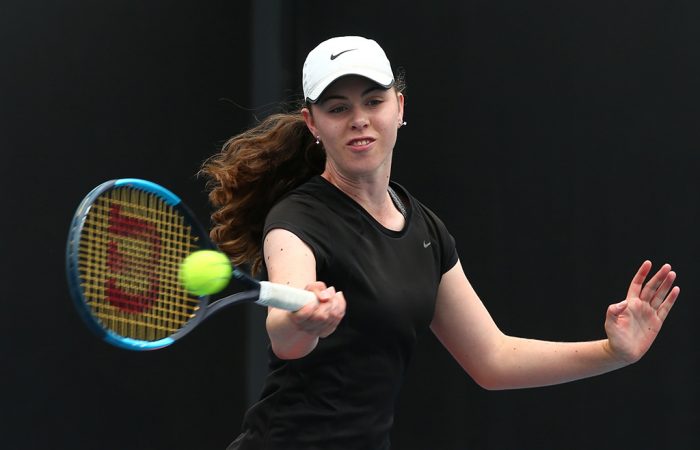 There are two Australian chances in the main draw for this week’s AGL Loy Yang Traralgon Junior International with Chen Dong and Talia Gibson competing in the boys and girls respectively.

There are another 15 Aussies (10 boys and five girls) in line to battle it out in qualifying on Wednesday and Thursday while another 40 (15 boys and 25 girls) will be signing in as alternates hoping to get a hit via a withdrawal.

Dong comes into the tournament with a career-high ITF junior ranking of 56 after a busy 2019 which included a first round appearance at last year’s Traralgon International.

The Queenslander featured in two j4 finals in his home state last July, going down in three sets to compatriot Philip Sekulic in Brisbane before beating Aussie Alex Bulte 6-2 6-1 on the Gold Coast.

The 17-year-old played 60 ranked junior matches last year including 40 on hard court where he has a 62% win rate.

Sekulic and Bulte are two of the Australians set for the qualifiers with the latter coming into the tournament in solid form after reaching the final of the Schnitz Summer International Gold AMT event at this venue where he lost out to 33-year-old Vincent Stouff.

Trafalgar’s Alan Valenzuela is down as one of the alternates hoping enough players withdraw to make it into the qualifying round.

Gibson returns to Traraglon after making the final eight in 2019 and the 15-year-old will be looking to build on a solid year.

The Western Australian had a stellar spell in July and August where she won the Rod Laver Queensland Junior Championship (J4) in Brisbane, the Mapei Gold Coast Junior International (J4) and the Australian Winter International (J2) in Tweed Heads in the space of six weeks.

The young gun who is ranked 69th in the ITF junior rankings already has a women’s win under her belt and will go into this week’s event with a all but five of her 47 junior matches to date have been on hard court where she has a 78.5% win ratio.

Amy Stevens is the highest ranked Australian in the qualifying draw.

It will be the second time the 17-year-old will aim to make the main draw at Traralgon.

Her only success in 2019 came in the Oceania Closed Junior Championships in Fiji though she made the final of a J2 event in Beijing.

As with Valenzuela, Traralgon’s Eliza Dunbar is on the list of alternates signing in on Wednesday.