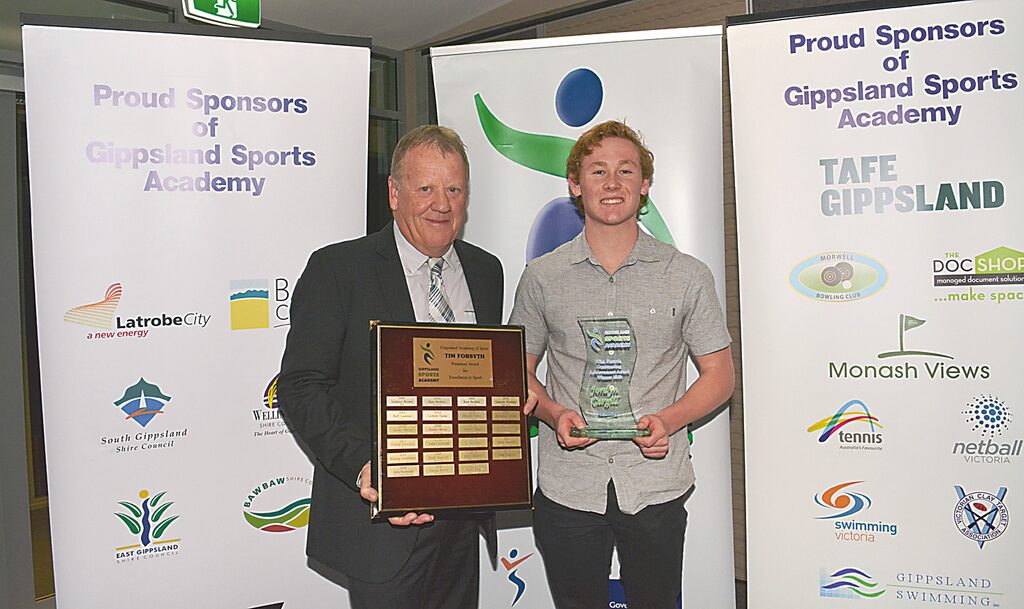 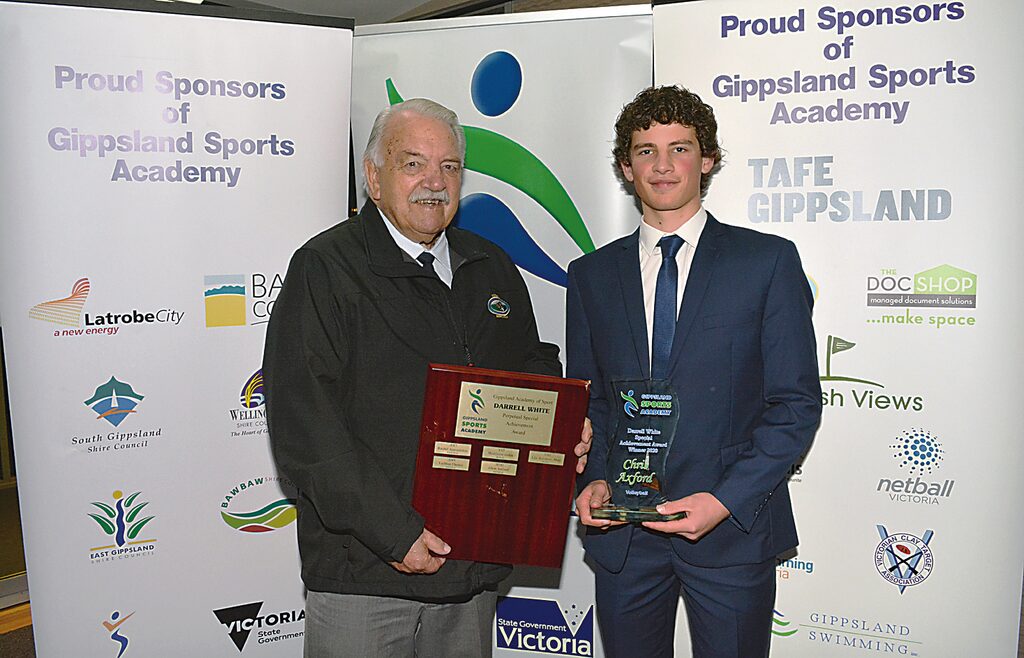 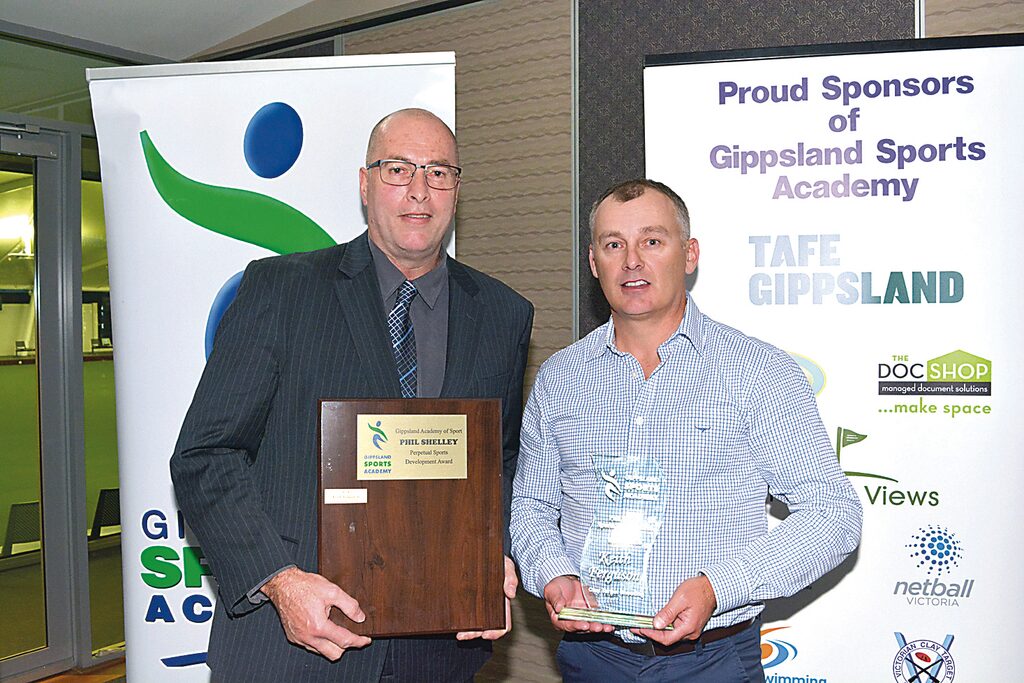 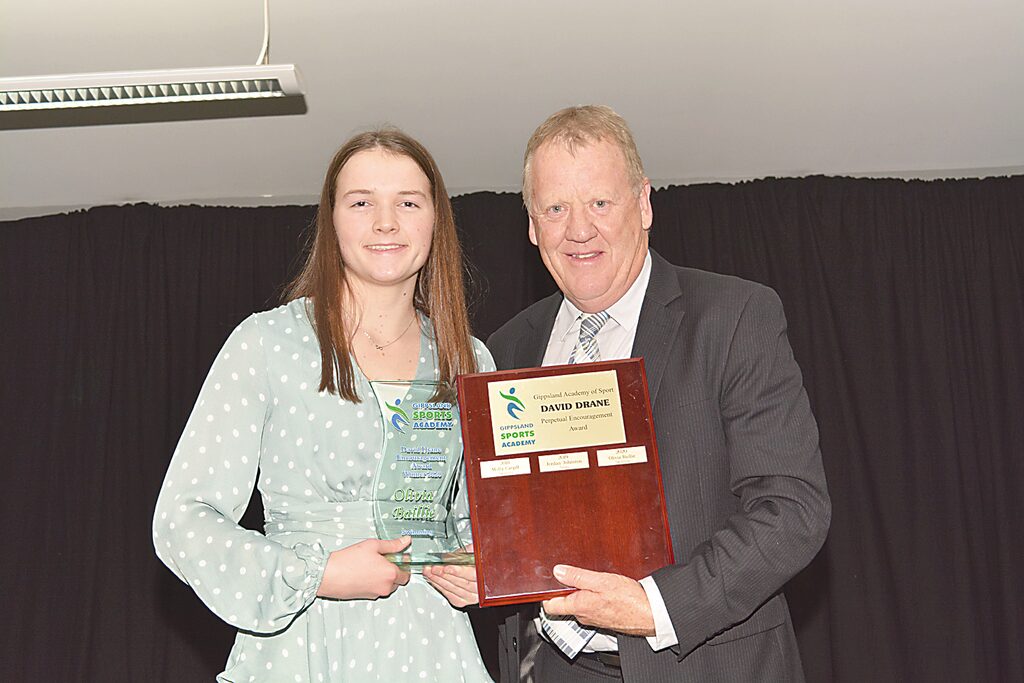 SPORT
GIPPSLAND SPORTS ACADEMY
By ANITA PISTRIN
The Gippsland Sports Academy held their Annual Awards night on May 21 at the Morwell Bowling Club, where 56 young Gippsland athletes received graduation certificates.
It was a great opportunity to celebrate the achievements of our athlete’s after a difficult 12 months, and present trophies to the Award nominees
More than 100 guests celebrated the achievements of the graduating athletes and were inspired by this year’s guest speaker Jacqui Cooper, five-time Olympian and Latrobe Financial Company ambassador.
There were four major awards presented this year.
Phil Shelley Award
The Phil Shelley Award for service to the Gippsland Sports Academy and sport in Gippsland.
This was awarded to Keith Ferguson (Sale).
Keith Ferguson has volunteered his time as the co-head coach of Clay Target Shooting specialising in Skeet and sporting disciplines for the GSA last two years.
Keith has had an impressive sporting career himself, which includes:
2016 Rio Olympics 10th place (highest finish from an Australian in Men’s skeet)
2012 London Olympics 20th place
2014 Glasgow Commonwealth Games Eighth
4 x World Championship Teams
17 x World Cup Teams
4 x Oceanian Championship Teams (1 x gold, 1 x silver, 2 x bronze)
4 x National Champion Gold, 4 x runner-up
4 x National Commonwealth Champion Gold, 6 x runner-up
18 x State Titles (Victorian, NSW, South Australian, Queensland, Western Australian and Northern Territory)
National Record (shot in Australia) in Qualification 124/125 and in Final 59/60
To have this expertise available to the Academy’s clay target shooting athletes has been invaluable and certainly worthy of receiving the Phil Shelley Award.
David Drane Award
The David Drane Award for encouragement was won by Olivia Baillie (Traralgon).
Olivia is a very dedicated and determined young athlete who has worked extremely hard to achieve her 100 backstroke and 200 backstroke national time in her first season of training at the National level.
During Victoria’s two lock downs phases, Olivia dedicated herself towards her fitness and strength. Showing her true colours and commitment towards being a National Performance swimmer.
This hard work and dedication lead to Olivia achieving her first two national times in quick succession. Most athletes like Olivia usually have years of training before they reach their goals, but when you are as committed and hard working as Olivia, things tend to happen sooner than expected.
If Olivia continues to train with the same level of vigour and passion that she can be a National medallist in years to come.
An amazing start to a promising swimming career at the age of 14. Olivia shows all the markers of a promising national swimmer through her commitment to training and her amazing workrate. Olivia takes feedback and advice very well and is eager to improve her ability and grow into a very strong and conditioned athlete.
Olivia trains with purpose and is very coachable, committed and passionate towards her improvement. Never being satisfied with her skills, Olivia shows maturity above her years. An amazing trait to have as a young and upcoming athlete.
Olivia is very deserving of this award and this would go a long way in showing Olivia that even though she isn’t winning national medals yet, it won’t be long if she keeps up the good work.
Darrell White Award
The Darrell White Award is in recognition of high achievement in a team orientated sport and was awarded to Chris Axford (from Korumburra)
Chris is a diligent trainer with excellent attendance and communication to the coaches. His willingness to work with younger and far less experienced athletes is very impressive and shows his outstanding character.
He always give effort to make technical adjustments the coaches suggest.
Chris is a long serving GSA athlete who has shown long-term dedication to the program.
By Chris winning this award it shows the other kids in the program what they need to do to become an excellent athlete and exceptional person.
Tim Forsyth Award
The Tim Forsyth Award for Sporting Excellence was won by Jordyn Cargill (from Traralgon).
Jordyn Cargill is a 16-year-old National Performance athlete and has been the most successful male athlete at the National Swimming Championships for the past five years in Gippsland.
Achieving his first national qualifying time at the age of 12, Jordyn has swam the 400m individual medley and finished in the top four each year since 2017.
Jordyn has never missed a final in his main event and has twice won medals finishing first at the age of 13 and third as a 14-year-old.
Jordyn is a fantastic example for all athletes across Gippsland, training 10 times a week Jordyn has the upmost dedication and attitude towards his swimming and is ability to race at the national level is unmatched across Regional Victoria. The Academy is very proud of Jordyn and are very privileged to witness Jordyn’s amazing ability to race at the national level, where he holds the current Gippsland and Country record for the 400IM.
Jordyn is simply the most outstanding swimmer of his age