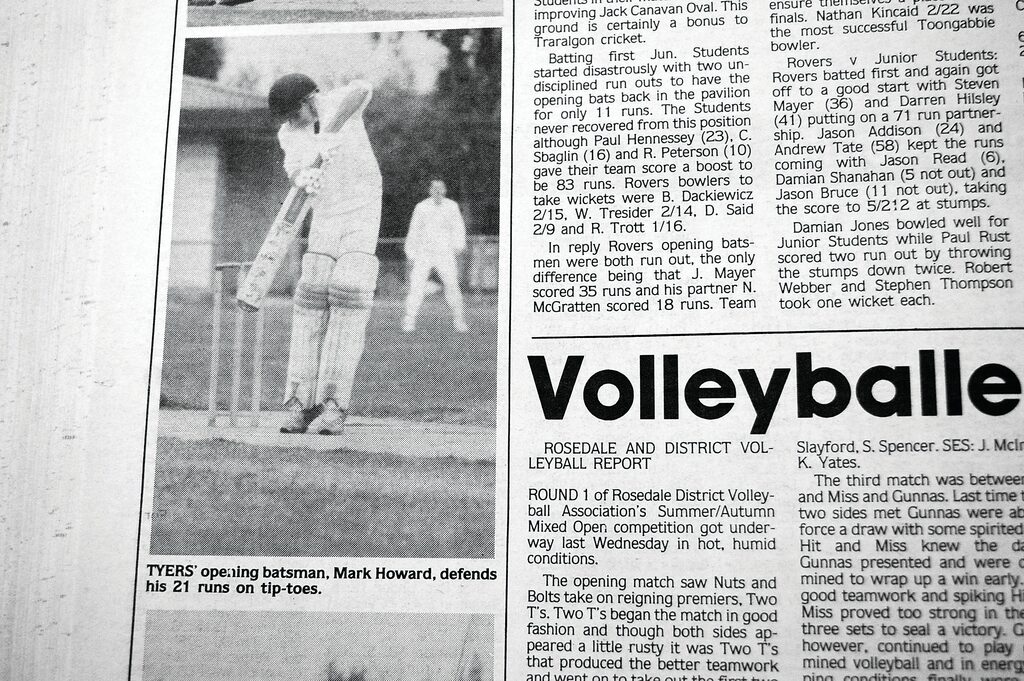 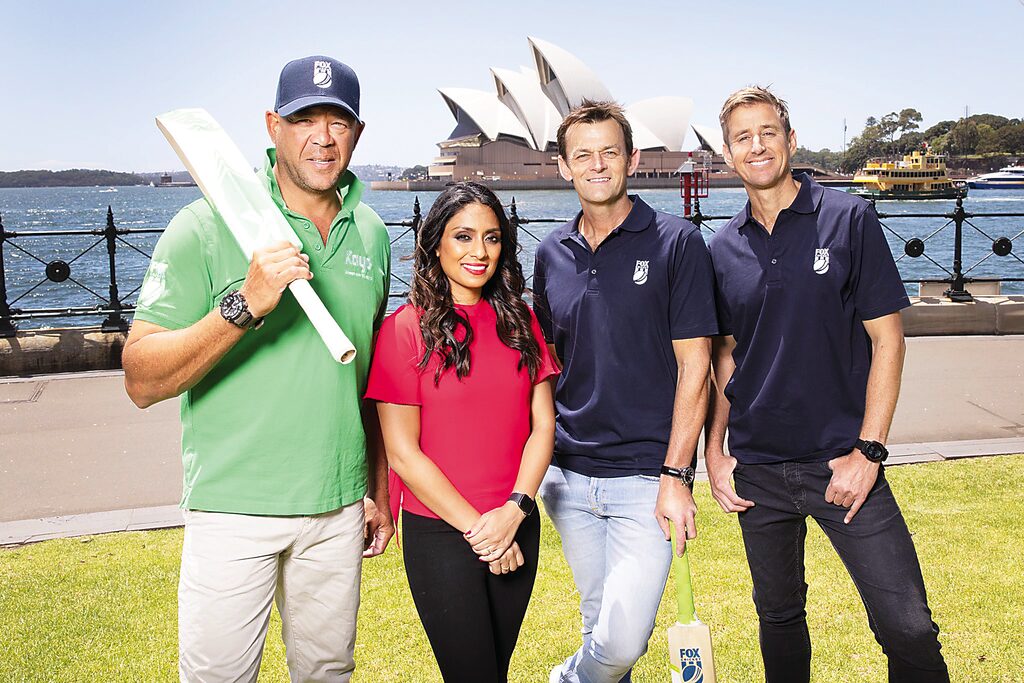 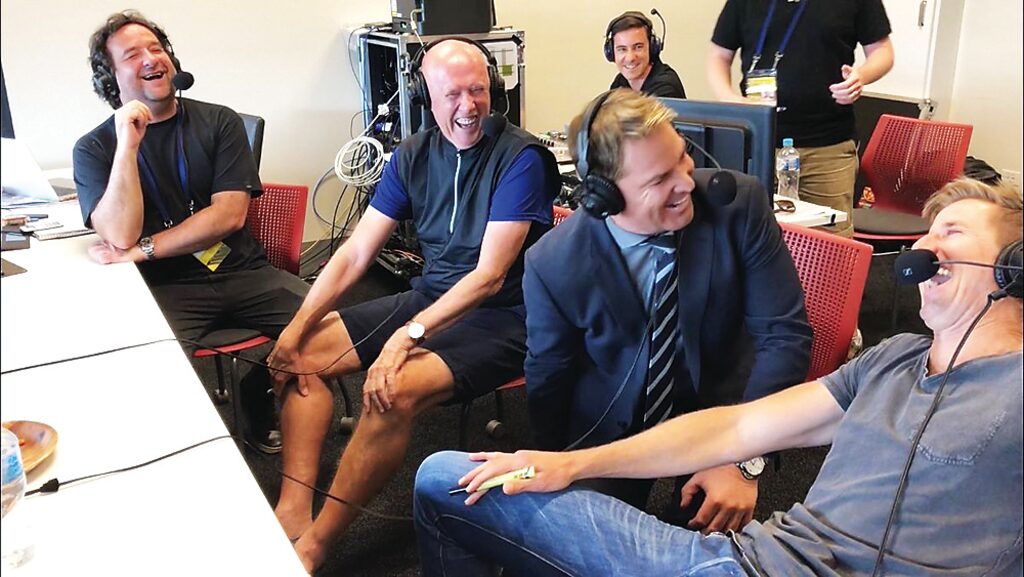 One of Australia’s most accomplished sports broadcasters and podcasters, Tyers’ own Mark Howard has an incredible story to tell.

Moving to the small town on the outskirts of Traralgon as a 14-year-old, Howard’s love of sport blossomed through his time in Gippsland, as he became a devoted member of the then Tyers Cricket Club, pushing up from the junior ranks to the A Grade senior side over his five-year career.

Now a voice heard by millions of people across the country on Fox Sports’ coverage of the cricket and AFL, as well by 58 million fans of his incredibly popular The Howie Games podcast, the 47-year-old is living the dream of any sports mad kid in Australia.

Sitting down for a chat with The Express, Howard described his time growing up in the Latrobe Valley, getting a start in the sports media industry, working alongside the greats of Australian sport, the growth of his podcast and much more.

The story of his connection to Gippsland begins back in 1986 when he and his family moved to Tyers after his father got a job overseeing one of the region’s biggest employers.

“My father worked for APM so we moved around a lot when we were kids and we were in Sydney halfway through Grade 6 when he got a job as general manager of the Maryvale Paper Mill – so he said ‘right we are heading to country Victoria’, a place we knew nothing about, and we ended up at a house on Jeffrey Drive in Tyers,” Howard said.

He explained his first impressions of the town and recalls a promise his parents made him upon arrival.

“My first memories of it were mum and dad saying if you are happy to move here I reckon we can get you a motorbike so I was pumped about that, but I remember one of the first things we did was go into Traralgon to the motorbike shop and it (the bike) immediately fell over, so I didn’t get the motorbike,” he said.

“The main shock for me though was going from a public school in Sydney wearing sneakers and a t-shirt and all of a sudden I was getting on the bus at 7.20am for an hour and 15 minutes to go to Gippsland Grammar school and had to wear a tie and a blazer which was a definite shock.

“We were pretty used to moving around at that stage though and it was all about finding a sporting club, which was the best way to make friends and really begin to settle in the new area.”

As a teenager Howard was as cricket mad as they came, as he made an immediate beeline for the local Tyers Cricket Club.

“Coming from New South Wales, I hadn’t played footy and didn’t play until I was at school in Sale, but I had played cricket and I was obsessed by it so the first year we moved down there it was straight to the Tyers Cricket Club – which was a massive part of my life,” he said.

“I remember going down there not knowing anyone, but I could bat a bit and bowl some leggies, so all of a sudden it was join the Under-14 team coached by a guy called Ron Little and I can still remember the guys I played with and it was fantastic, as going to the cricket club became the highlight of my week.

“Playing at Tyers was also my first real introduction to adult life, as at 14 I started doubling up and playing seniors in the C Grade, so in summer it was non-stop cricket which was outstanding for a cricket mad kid like me.”

Quickly climbing the ranks, before he knew it Howard would see himself in the Tyers A Grade side, which was a sporting experience he still values dearly to this day.

“By the time I was 15 I played in the A Grade for the first time and I remember not really bowling and batting number 11, making 10 or so not out and within three weeks I was opening the batting with men, against men,” he said.

“As well as really fond cricket memories, they were guys that taught me about life and growing up in that men’s team environment, they were really larger than life figures for me and really shaped me and my love for cricket.”

Staying in Tyers until 1991, Howard would initially begin a business degree in sports management at Deakin University before setting off on a backpacking expedition, taking him to all corners of the world.

However, his dream of being involved in the sporting industry still remained, and it was one opportunity on the other side of the world that spring boarded him into the start of what has turned out to be a very successful career.

“Coming back as a 22-year old having seen the world, I thought I was pretty well equipped to take on life so I started to apply for lots of jobs in the sports industry and I wasn’t even getting interviews,” he said.

“I then got a short opportunity in event management at the Australian Grand Prix in 1997 and, after talking to a few of the other guys and realising they travelled with the tour all year round, I reached out to the head office in England who said if you can get over to Sao Paulo then you can work as a rigger.

“After working at a few GP’s through South America, they eventually offered me a full-time job on the tour behind the scenes before another opportunity came up to interview the
drivers, which I then put my hand up for and turned out to be the start of my career in broadcasting.”

Finding his groove as a broadcaster interviewing the stars of the F1 world, Howard would eventually find his way back to Australia where he continued to jump at a host of opportunities before falling into his dream job.

“I came home and worked on the Olympics in Sydney and then I found my way into it, I kept plugging away hoping to get a reporting role and I got a crack at that at Channel 7 and then Channel 10 offered me a full-time job as a reporter,” he said.

“I worked on the V8s which I didn’t know a great deal about, worked in the newsroom doing some strange cat-up-the-tree style stories and just learnt the trade really – I got some gigs on the AFL football on the boundary for a couple of years and covered some grand finals which was brilliant.

“Then Channel 10 got the cricket, and I was hoping to get an opportunity to sit on the boundary and report – but my boss at the time said ‘I know you love cricket do you think you can commentate’ and that was beginning of what is my dream job.”

Playing a key role in Channel 10’s coverage of the Big Bash, the self-proclaimed cricket tragic from Tyers would now find himself rubbing shoulder with the Australian legends he grew up idolising.

“(Sitting next to those guys) is bizarre to be honest, it was almost as if I had won a prize where I could go and do my dream job for a day,” he said.

“It is a lot of work, a lot of travel and a lot of time away from my family – but I still never take it for granted when I am sitting in a commentary box calling the closing stages of one of the best series ever seen in this country between Australia and India and Rishabh Pant is taking India to a historic victory.

“I am sitting beside Shane Warne, Adam Gilchrist and Mark Waugh listening to their thoughts on it and it is the proverbial dream come true and if you work hard enough at it hopefully you get the respect of the people working around you – and to be in the position where I can call some of these guys mates it is bizarre.

“I am just a bloke who couldn’t hit it off the square in Tyers calling international cricket and travelling the world to do it.”

Along with his work as a broadcaster, Howard channelled his passion for sport into the podcast space, creating what is now The Howie Games empire in 2016.

A concept that sees him sit down with the greats of global sport, he explained the
motivation behind the project.

“I had done an interview for Channel 10 at the Australian Grand Prix with Lewis Hamilton, and we had a chat that ended up blowing out to 20-25 minutes where he gave some great insight – but due to the constraints of commercial TV they cut the story up to five minutes so I was having a whinge to a mate of mine called Jarvis Hunder, the editor, and he said there is 15 minutes of gold here you should do podcasts with these people,” he said.

“So after doing some research into what a podcast is I thought this would be good fun so I went about recording these interviews, starting with Adam Gilchrist, and we just chatted for an hour and a half and put it online for the people to see.

“Now we are up to 58 million downloads across the series and it is a privilege to sit down with these people that have achieved extraordinary things and learn about them and what makes them so great in their respective fields.”

A man now living out his dream, Howard had this message to those young people around chasing their dream no matter what the field.

“I was just an average sports mad kid from a tiny little town in regional Victoria and now I am calling international cricket – so if I can do that anyone can do anything,” he said.

“If you are a 14-year-old kid out there and you have a dream job out there, somebody has to do that dream job so it might as well be you – and it can be you if you work hard enough, don’t get upset by setbacks and always continue to push on from one opportunity to another.”