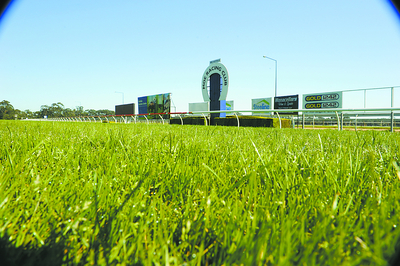 A WINNING treble made December 5, 2021 a date to remember for Paul and Tracey Templeton.
The Moe training partnership enjoyed a landmark day as High Done, Commanding Witness and Joltin’ Joe proved successful.
High Done and Commanding Witness landed success at Bairnsdale, while Joltin’ Joe completed a bumper afternoon by saluting at Werribee.
“It’s been a good day, you don’t get them very often, so we’ll enjoy it,” Paul Templeton told Racing.com after Joltin’ Joe’s win.
“Our boys took the others to Bairnsdale, they’ve had a great day and we’ve just topped it off.
“There’s 20 (in the stable) at the moment, we pre-train a lot. We’ve got 10 of our own and it’s been a great day.”
Joltin’ Joe continues to show he is the stable’s most exciting talent, producing a scintillating late burst to win the $35,000 Global Turf Benchmark 64 Handicap (1100m).
The four-year-old son of Stryker took his career record to four wins from 22 starts following a smart ride from Jason Maskiell to nose out El Salto.
Joltin’ Joe landed some good bets, backed in from $31 into $19.
Earlier, High Done ($7) scored an impressive all-the-way win in the Dyson Group Rating 58 Handicap (1600m).
Arron Lynch took the son of High Chaparral straight to the front and he never looked back, packing too much class to comfortably hold off favourite Sarnia by 2 ¼ lengths.
Commanding Witness ($12) staved off Damselfly’s Kept by a narrow margin in the Four N Twenty Rating 58 Handicap (1200m).
Ridden by apprentice Thomas Stockdale, Commanding Witness continued his Bairnsdale love affair, making it back-to-back wins at the East Gippsland venue.
The great run for Team Templeton continued on Saturday as Joltin’ Joe ran an outstanding second at Flemington.
Ridden by Jason Maskiell, Joltin’ Joe belied his $51 starting price to charge home for a runner-up placing, beaten a length by Pioneer River in the $130,000 Darren Gauci Handicap (1200m).
HORSE racing in Gippsland this week is headlined by the Ian Grant’s Caravans Christmas Party Raceday at Moe on Friday.
With a forecast of 28 degrees, it promises to be a great day to catch the racing action.
Gates open from 12pm.