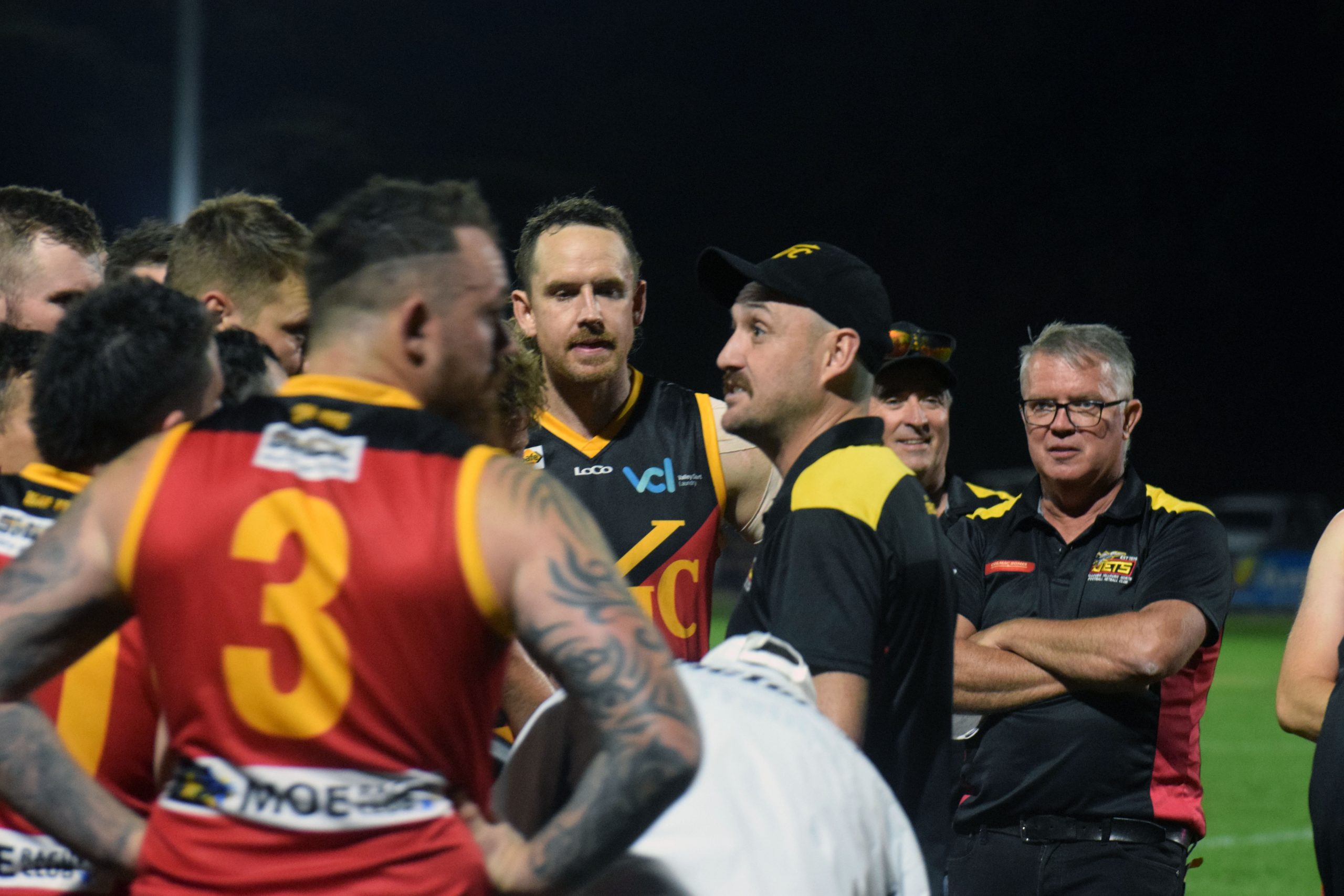 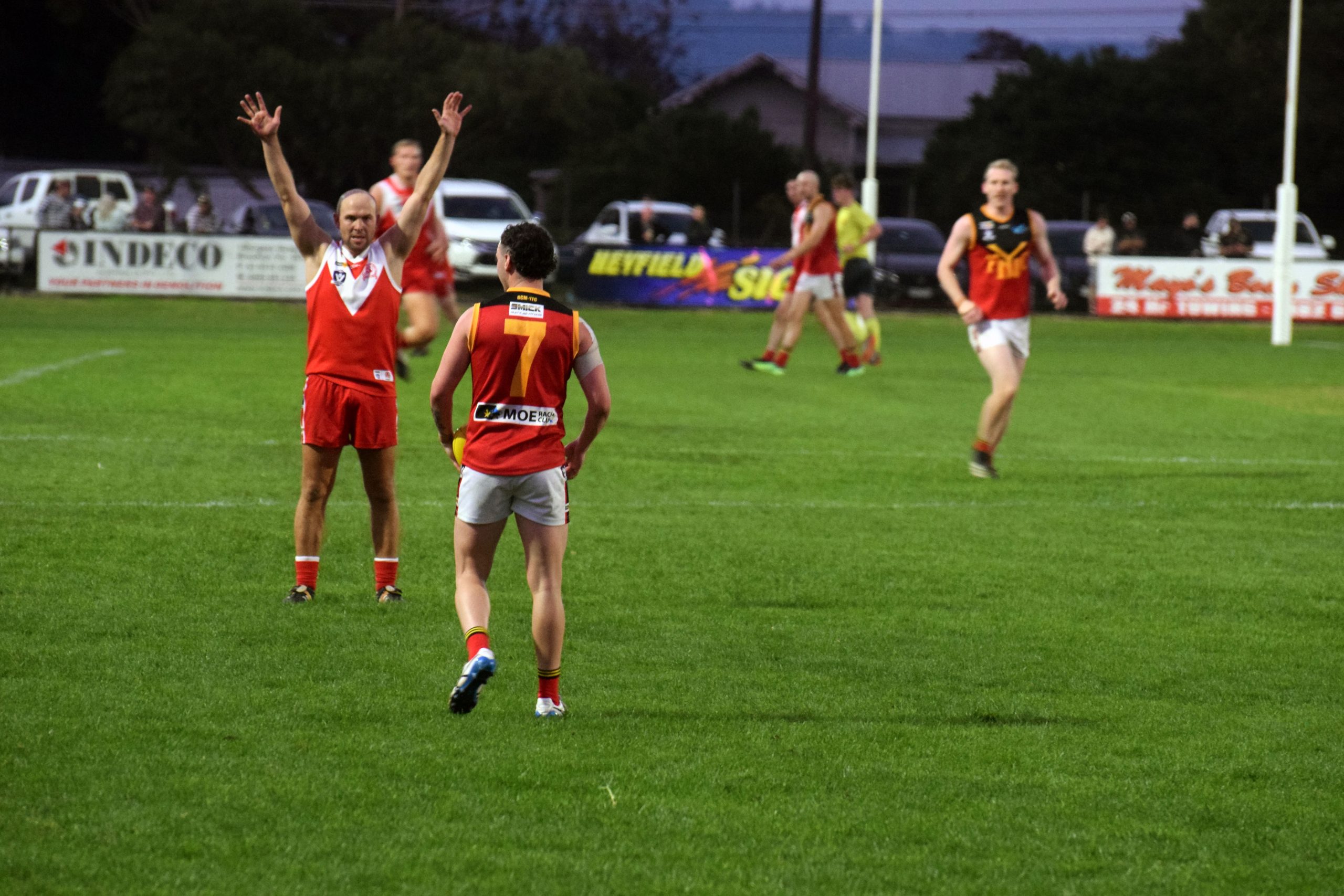 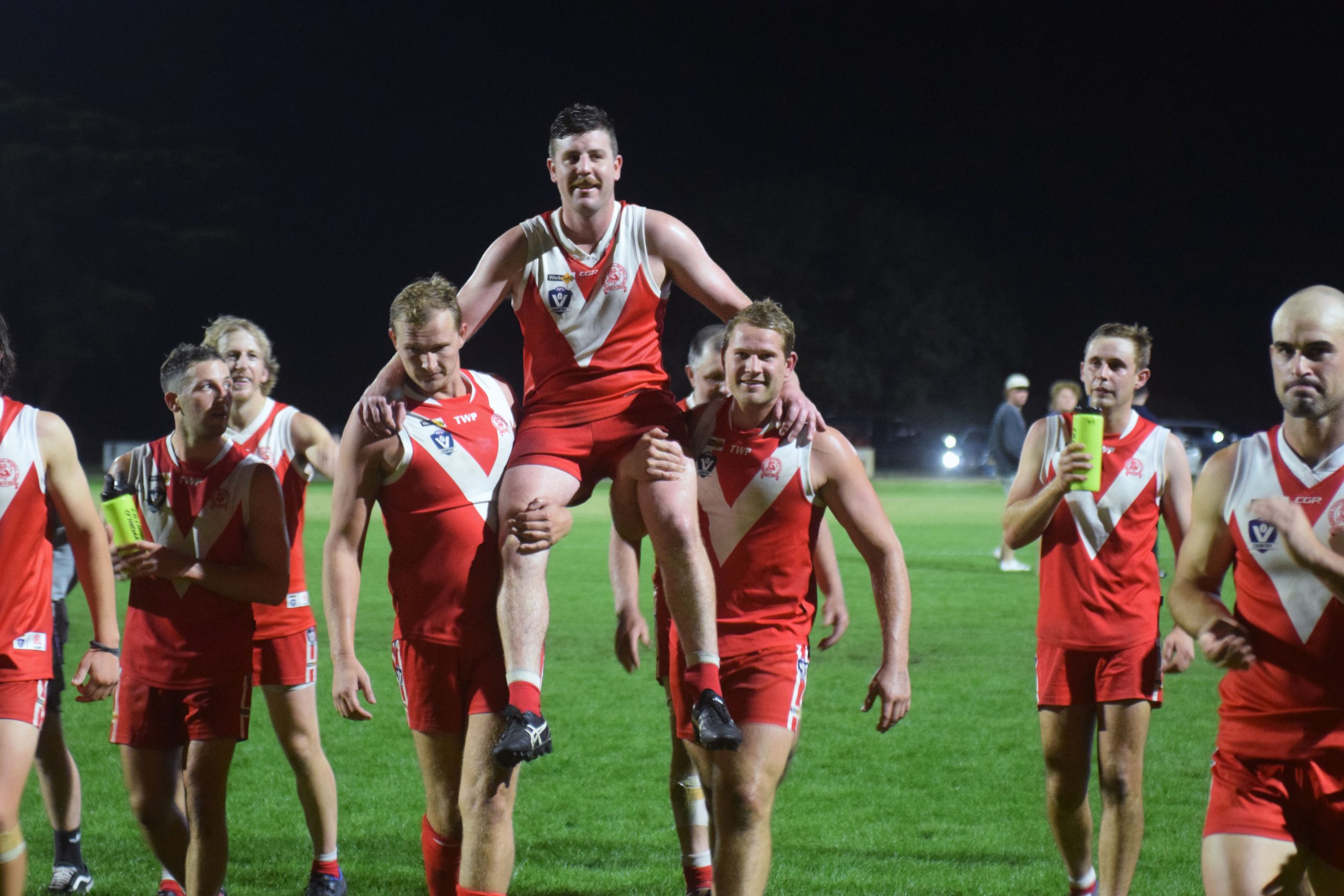 A SPIRITED last quarter comeback was not enough for Yarram to overcome premiership favourites Yallourn Yallourn North as Round 2 of the North Gippsland Football-Netball League season drew to a close on Good Friday.
In their now traditional clash it looked like the visiting Jets would rue their early game inaccuracy as the Demons surged in the last quarter, but a late goal from best on ground Tyler Brown sealed the win for the Jets 9.23 (77) to 9.11 (65).
The match started after a sensational rendition of the national anthem by Maddie Veneman, who would be a red hot favourite to take out any version of Yarram’s Got Talent.
While her singing undoubtedly hit the target the same could not be said of the YYN forward line. They had all the play in the first quarter but could only manage a very ordinary 3.9 (27).
Ironically it was one of the harder shots on goal that saw the Jets get their first major.
And of course it was skipper Dean MacDonald who kicked truly.
After missing a series of set shots MacDonald swooped on a loose ball in front of the Yarram hill only a few metres in the field of play and about 40 metres from goal he feigned to go boundary side.
The defender took the bait and MacDonald reeled towards the middle. From here he laid the ball across his boot, snapping truly from 45m.
It was a truly sensational effort and even D-Mac himself was impressed as he ran towards the home crowd seeking some feedback.
The locals were less impressed with most signalling his effort was a one out of 10.
MacDonald closed out the quarter with his second major, a much simpler set shot at the 26-minute mark and the siren couldn’t have come soon enough for the locals with Yarram managing just a solitary behind in the first stanza.

After a quarter time bake from Griffin Underwood, who as usual had plenty of the ball across half-back for the home side, the Demons came out firing in the second quarter.
With Underwood forgoing his role across half-back and injecting himself into the middle Yarram was finally able to take advantage of Dan Vardy’s dominance in the ruck.
With just a minute on the clock it was Josh Swift who slotted home the Demons first of the match. After absolutely dominating play the Jets lead was now only just north of three goals.
With the ‘Killer B’s’ dominating in the middle, not Jumping Jim Brunzell and B. Brian Blair, but a combination of Dylan Bath, Dylan Bentley and Brown, normal services resumed for the remainder of the first half. Unfortunately for YYN though this included their deplorable goal kicking accuracy.
Swift grabbed his second goal on the cusp of half-time as Yarram headed to the sheds trailing by only 23 points. A better reflection of the dominance of YYN however was in the 18 scoring shots to five.
Having taken over the job on MacDonald after he slotted two majors, Kiefer Sutherland did a great job in stopping the YYN skipper after half-time, however what this did was free up his original opponent Keenan Hughes.
With Brown again in everything for YYN and Blake Dyson and Josh Keyhoe coming to the fore through the middle and across half-forward after the main break it was Hughes who dominated closer to goal.
The big unit clunked mark after mark and helped himself to five shots on goal in the third term alone and saw his side move out to what was surely an unassailable last change lead.
Were it not for the simply awful accuracy in front of goal the game would have been dead and buried.
However, the 8.20 (68) the Jets had managed left a Lloyd Christmas level of hope among the Yarram faithful.
Predictably, the last quarter saw the Demons throw caution to the wind and get themselves back in the game.
Coach Justin Staley threw the magnets around and consigned himself to the pine going small in front of goal. He also moved Corbin Sutherland to the wing and things suddenly started to happen for Yarram.
Matt Clavarino was in everything for the Demons shooting out the hands to the run of Underwood and Sutherland and when Swift kicked his fourth of the game the margin had reduced to under two goals with 23 minutes gone on the clock.
It was, almost out of nowhere, game on.
The steady poise of the Jets which saw them own the ball across half back before switching play to advantage was now nowhere to be seen.
Nominal centre-half-forward Mitch Luck had moved behind the ball in preservation mode and the side that had rewarded their teammates run all day had started to simply punt the ball into space and hope for the best.
What coach Barrie Burnett wouldn’t have given to be out on the park to steady his ship.
The panic was perhaps best summed up when Dyson, who had been fantastic on a wing all night, burnt Luck with the hands and kicked across his body in hope.
Luck ensured Dyson knew about it and will undoubtedly be requesting the aloe vera at training during the week.
But cometh the hour cometh the man. Just when it seemed an Easter resurrection was in the offing it was Brown who sharked the ball from a 25th minute stoppage.
He turned on the afterburners and ran into scoring territory leaving his opponents grasping at thin air. Even before the ball had split the middle he was on his way back to the middle for the next centre clearance and the four points were on their way back to Yallourn North.