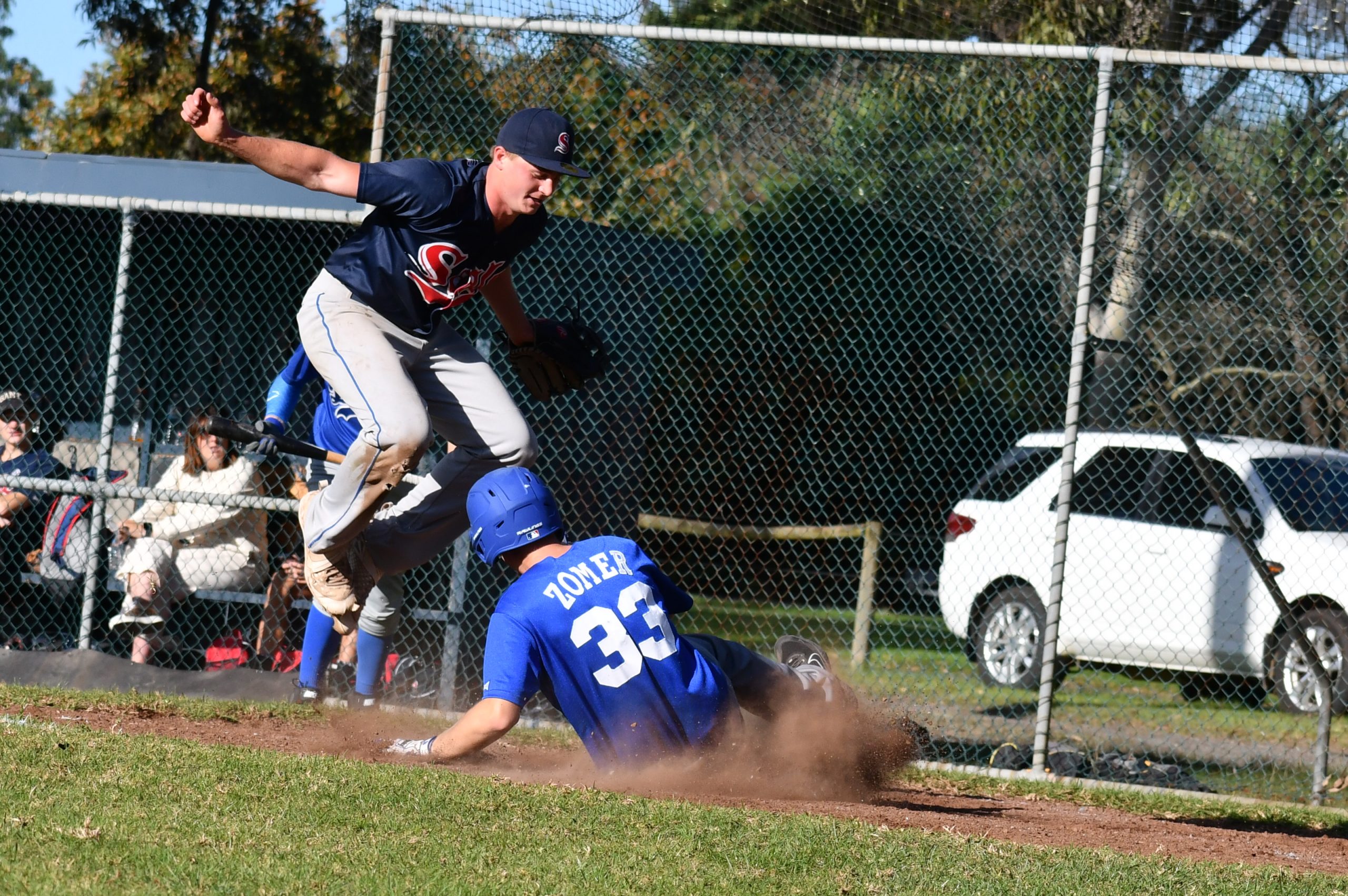 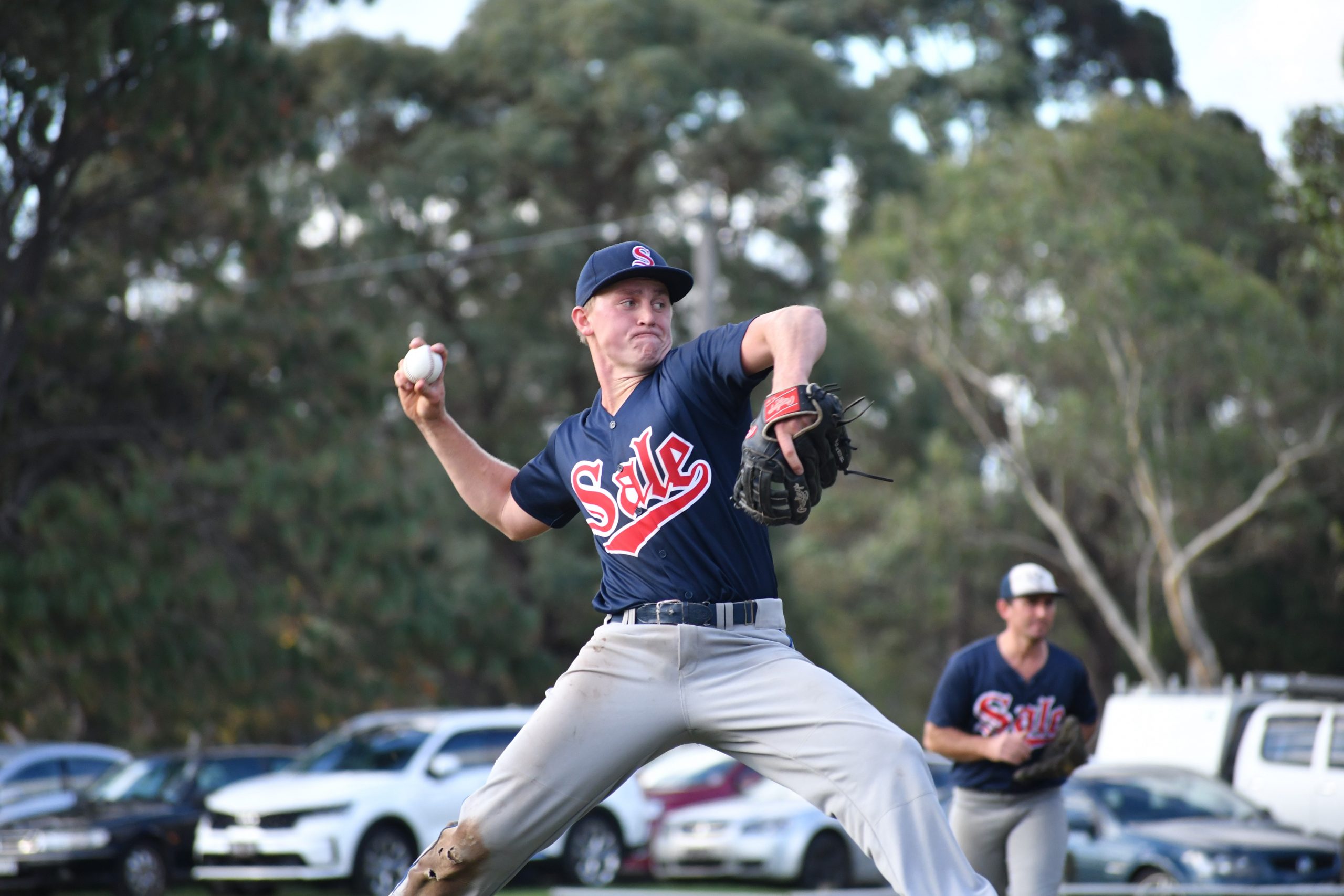 A GRADE
MOE/Newborough Dodgers defeated Sale Rangers 11-1 in Latrobe Valley baseball last Sunday.
The Dodgers started strong and tallied four runs in the seventh inning. The offensive onslaught came from a double play by Trent Jobs and Mitch McGrath.
Joel Hector started on the hill for the Rangers.
The hurler allowed seven hits and seven runs over three innings, throwing two strike outs and walking one.
Will Hector threw three innings in relief. The Rangers had seven hits. Kevin Arbuthnot and Will Hector each had multiple hits with Arbuthnot leading the Rangers with three hits at four bats.
Jobs pitched for the Dodgers, only surrendering one run on the seven hits over seven innings and throwing seven strike outs.
Moe/Newborough’s Benn Zomer, Nathan Robinson, Mitch McGrath, Tim Wilson and Jason Smith each racked up multiple hits. Zomer lead the Dodgers at the plate with three hits at four bats.
LUKE Hornstra threw a gem of a game for Traralgon Redsox in the match against Churchill Braves.
Hornstra allowed zero runs as Traralgon blitz Churchill 15-0.
Traralgon secured victory thanks to 12 runs in the first innings.
Matt Robertson, Josh Graham, Hornstra, Brian Spiteri, Andy Matthews and David Long all moved runners across the plate with RBIs in the innings.
In the first innings it was the Redsox who got their offence started when Robertson drew a walk, scoring a run. A single by Gregg Duncan in the first was a positive for Churchill Braves.
Hornstra led things off on the mound, striking out seven and walking zero to go with the zero runs mentioned above.
Jacob Dickinson was on the mound for Churchill Braves.
Dickinson lasted one-third of an inning, allowing one hit and eight runs.
Luke Anson and Rhys McKenzie entered the game as relief, throwing two and two-third innings and one innings respectively.

B GRADE
AN early lead helped the Moe/Newborough Dodgers defeat the Sale Rangers 22-8.
Moe/Newborough scored on a home run in the first innings by Anu Meenakshi, and on an error and a single by David Robinson in the first innings.
The Dodgers earned the victory despite allowing Sale Rangers to score five runs in the fourth innings.
Sale Rangers big bats were led by Anthony Clissold and Rohan Hector all driving in runs in frames.
The Dodgers tallied 10 runs in the third innings with the offensive firepower for the Moe/Newborough Dodgers coming from Jesse Wilson, Brett Wilson, Eric Robinson, Matt Luke and David Wilson who all drove in runs Traralgon Redsox took their game in a dramatic walk-off fashion, thanks to a walk-off at the end of the game to topple Churchill Braves.
The game was tied at the six with Traralgon Redsox batting in the bottom of the sixth when Dave Combridge was struck by a pitch, driving in the final run.
Traralgon Redsox took an early lead in the first innings. An error scored one run for the Redsox. Traralgon collected five hits and Churchill Braves had four in the high-scoring affair

C GRADE
TRARALGON Redsox watched the game slip away early and couldn’t recover in a 12-5 loss to Churchill Braves.
Moe/Newborough took the win against Sale 9-0.