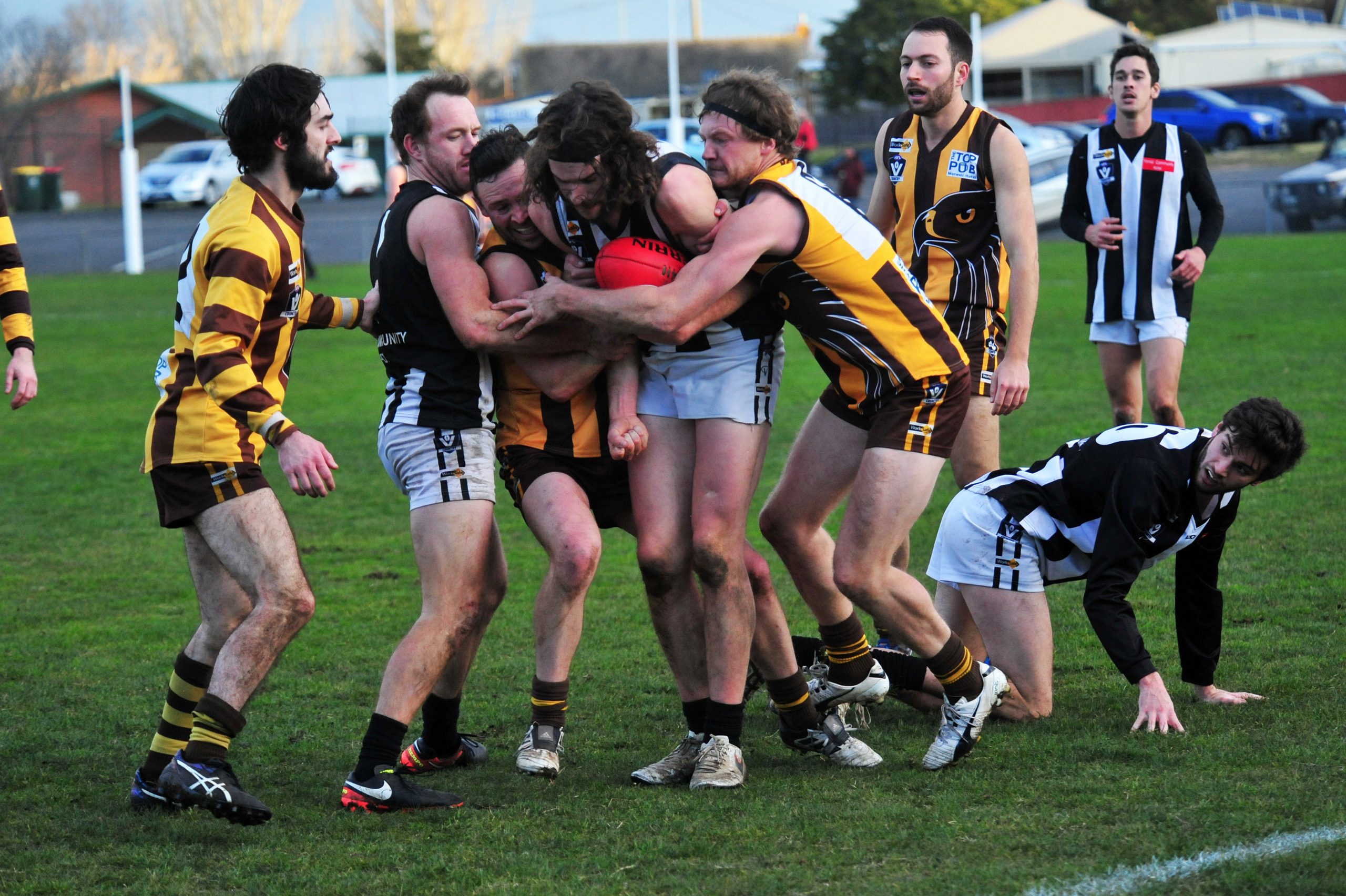 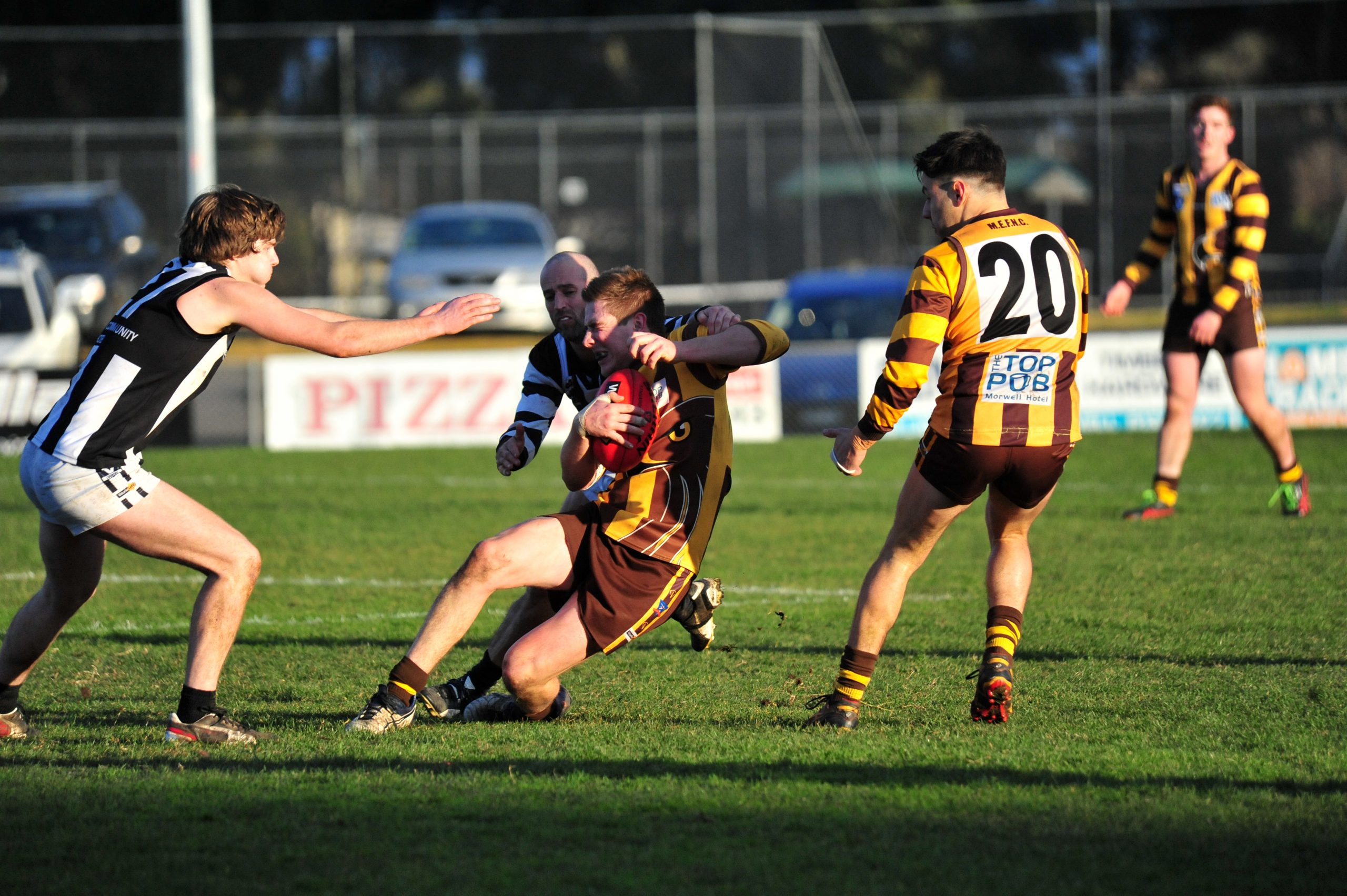 The Magpies struggled to apply any real pressure on the Hawks and missed a number of early opportunities to score.

Morwell East coach Colin King said he was pleased with his team’s performance.

“It’s been important for us to have wins against the top teams during the last three games to keep us in contention for finals and we’ve managed to do that,” King said.

“We’ll keep doing more of the same and keep up the forward pressure and hopefully it will keep bringing us success.”

There was little action during the early stages of the first quarter with both teams producing an ordinary contest.

Visser had another opportunity in front of goal for Yinnar but just snuck it in for a behind missing a chance to get the first goal of the game.

Brandon Francis was getting a lot of the ball and moving it forward for Morwell East and assisted Steven Tobin who kicked it straight through the middle of the posts for the first goal of the game 13 minutes into the first term.

Yinnar were getting opportunities at goal but failing to convert.

An easy mark was taken by Ben Marks for his first goal and Morwell East’s second.

Frank Marks got a free kick and a certain goal from 50 metres for Morwell East’s third in the closing minutes.

Riley Flanigan got an opportunity for Yinnar in the opening minutes of the second quarter but nothing came of it.

Yinnar received more of the early possessions but failed to create any opportunities.

Frank Marks kicked with the aid of the breeze from 50 metres out, securing the first goal of the second term for the Hawks.

Morwell East’s Eric Semmler took a penalty to stretch the lead to 26 points six minutes into the second term.

McCulloch took a great mark for Yinnar in front of goal to get the Magpies’ first goal of the game.

Andrew Brown for the Hawks created a loose ball in front of goal and Jarrod Lont kicked it off the ground for a great goal for the Hawks.

The ball was constantly in the Hawks’ forward line in the opening minutes of the third term.

Liam Visser nabbed an easy goal for Yinnar, the first time the ball moved into the Magpies’ forward line.

The Magpies looked like they were getting themselves back into the game when Morwell East’s Ben Marks kicked the Hawks’ first goal for the quarter.

Morwell East started to gain control again as Visser took a mark for Yinnar and kicked the Hawks’ fourth of the game.

Yates received an opportunity just inside 50 but fell short for a point.

Visser put the ball on the boot to score the first goal of the final quarter to close the gap on the Hawks.

Sam Marks took a great mark 40 metres out for Morwell East with a beautiful kick straight through the middle.

A quick turnaround gave Ben Marks an opportunity for Morwell East to score his third goal.

Yinnar replied with its sixth.

It was a close call during the first quarter in the clash between Newborough and Yarragon.

Newborough only edged in front by two points at quarter time.

The Bulldogs then held Yarragon to a goalless quarter in the second term to increase their lead.

The second half of the game was a different story with Newborough getting into its stride and dominating the third and fourth terms.

Although the Demons were not victorious, they did put in a good performance compared to recent showings.

The Blues put on a great display and had a six goal lead at the end of the second quarter.

It was followed up in the second half with another 10 goals kicked by Thorpdale to Boolarra’s five.

Thorpdale’s top goal scorers were Matt Powell and Tom McDermott who kicked four apiece while for Boolarra it was Troy Tobin with three.

James Holmes took best on for Boolarra while Nick Fairbank took the honours for Thorpdale.

The Bombers led at the end of every quarter and held the Tigers to a one goal quarter during terms one and two.

It was a great display of football by the Bombers as Mirboo North struggled to keep up with the pace of the quality Bombers side.

Tim Phillips kicked four for YYN to be the top goal kicker while Jacob Nash and Brayden Wilson kicked two a piece for the Tigers.

Barrie Burnett took best on for YYN and Darryl Mayman for Mirboo North.

It was a low scoring first quarter and then both teams created more opportunities in the second term with Trafalgar leading 5 6 (36) to Hill End 2 4 (16) at half time. Trafalgar then turned up the heat and dominated the Hillmen for the rest of the game.