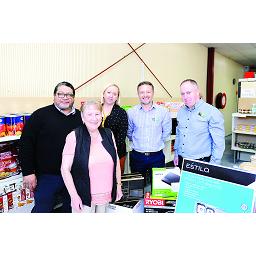 A Traralgon food bank is looking for volunteers to help with their increasing number of customers and is now considering opening shop for a second day each week.

“What we find is there’s more people coming through and this is now indicative of what’s happened in the Valley with the mine’s closing and people are now facing food [issues],” Pastor Lamb said.

“The cost of living has gone up and people want some help.”

The food bank, which catered mostly to concession card holders for the past nine years, had an average of 100 weekly customers before Hazelwood closed in 2017.

Customers can fill a bag with a variety of items such as fresh food and vegetables and canned items for a donation of $9 “if they have it” but others just give a gold coin donation which is used to finance rent and the food bank’s operations.

Pastor Lamb said the program was so successful that many people, including government agencies and businesses, had jumped on board to support them.

Recently a team from the Department of Health and Human Services donated items to the warehouse where the church meets.

Pastor Lamb said as well as opening a second and even a third day they were also considering the possibility of opening food banks outside of Traralgon.

“For example we might look at starting one in Churchill, up in Morwell, maybe go down to Rosedale. This system really works well and we believe in taking it out where people are,” he said.

Heart Focus is also conducting life skills programs for unemployed people and linking them up with possible employers.