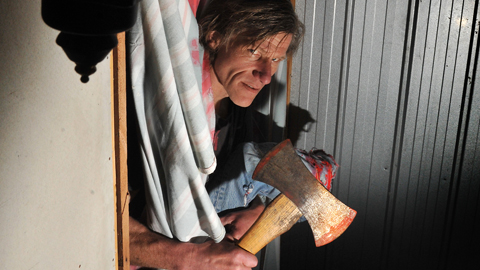 This could be Gippsland’s last chance to get its fill of scares and thrills at David Kupisiewicz’s ‘haunted house’ this Halloween, with his plans to return to the United States next year.

The Rosedale resident and his family are renovating their house to sell and move back to their home state of California, but they will leave the residents of Rosedale with a greater enthusiasm for the American holiday, which falls on 31 October.

Mr Kupisiewicz describe his haunted house as “decorations that got out of control”, and he has been credited as bringing Halloween to his neighbourhood by residents.

The spooky set up in Mr Kupisiewicz’s garage and shed received more than 200 visitors last Halloween.

“We started it just for our kids, who were missing the American holiday. We invited more people the next year… each year people ask us, ‘will you be doing it again next year?'” he said.

Mr Kupisiewicz’s has decorated the garage and shed to scare children and adults alike; filled with fake blood, body parts, cotton spiderwebs and his creepy creations.

He said he tried to add something new every year and this Halloween Mr Kupisiewicz has introduced a mechanical monster which took more than 30 hours to create.

“I used to be a concert lighting designer, so it’s a good creative outlet for me,” he said.

“I like the challenge of figuring things out and making them work.”

He said he would “definitely” continue to spook friends and neighbours with a haunted house when they returned to California.

“It became a thing I really enjoy doing. A few friends of mine from America came and helped me out last year and enjoyed being involved as well,” he said. Entry to the haunted house is by gold coin donation, with all money going to Rosedale Primary School. All are welcome to the haunted house on 31 October from 8pm at 36 Cansick Street, Rosedale.