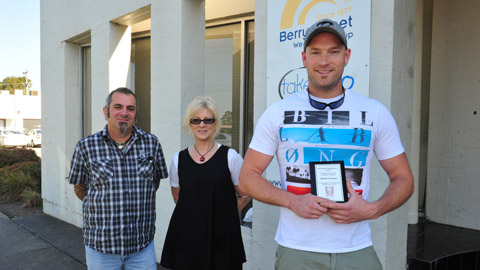 AFTER years of striving for creature comforts and success in his career, Morwell’s Glenn Veysey was surprised to find his life was not as fulfilling as he imagined it would be.

The 29 year-old power station shift-worker said he felt he had a reached a point where he needed to give back to the community.

“I had everything I strived to get, but it was not completely satisfying; I wanted something different, then I saw an advertisement calling for volunteers to sort of mentor young people,” Mr Veysey told The Express during Youth Mentoring Week last week.

Mr Veysey signed up to join Whitelion’s Community Integration Program about two years ago, and began spending time with a young teenage boy, doing activities that interested him with the ultimate goal of re-connecting him to the community.

From there, he met a friend of his young charge, and also began spending time with him.

“I offered to help him out as well; it’s like taking on the role of an older brother,” Mr Veysey said.

“The goal is to encourage them to get into work or stay in school and try their hardest; if a kid is trying to get a job, I try and encourage him to do a course or volunteer work, develop their skills and references, and try to guide them along.

“Life’s hard enough as it is, and if you haven’t got anyone to fall back on, it’s even more difficult; I try to be that person.”

Mr Veysey, who received an award for outstanding contribution last year, said he hoped to continue volunteering with Whitelion.

Whitelion CIP leader Adrian Giannini said the program ran throughout Gippsland, but was based in Morwell in partnership with Berry Street, and had been running since July 2010.

“This program is important because Gippsland is quite diverse regionally, and it gives the community a better understanding of young people in out-of-home care, which includes foster care,” Mr Giannini said.

“In Gippsland, the program is nicely entrenched; we have 10 volunteers in the Latrobe Valley at the moment, although we could do with more male volunteers to help young people out especially in Traralgon, which is a big area and has a lot of out-of-home youth.

“Over the past two years, we’ve had 45 volunteers in total, including the 23 current ones; we’ve helped up to 37 young people.”

Mr Giannini said men were always harder to attract to volunteer roles because of perceptions of what it entailed.

“Men don’t realise they ‘mentor’ on the job anyway when they impart life skills to their apprentices,” he said.

He said volunteers all received training and had the appropriate checks carried out, and were matched to young people.

“The main requirement is to have a licence; we want to facilitate a link that’s beneficial to both parties,” Mr Giannini said.