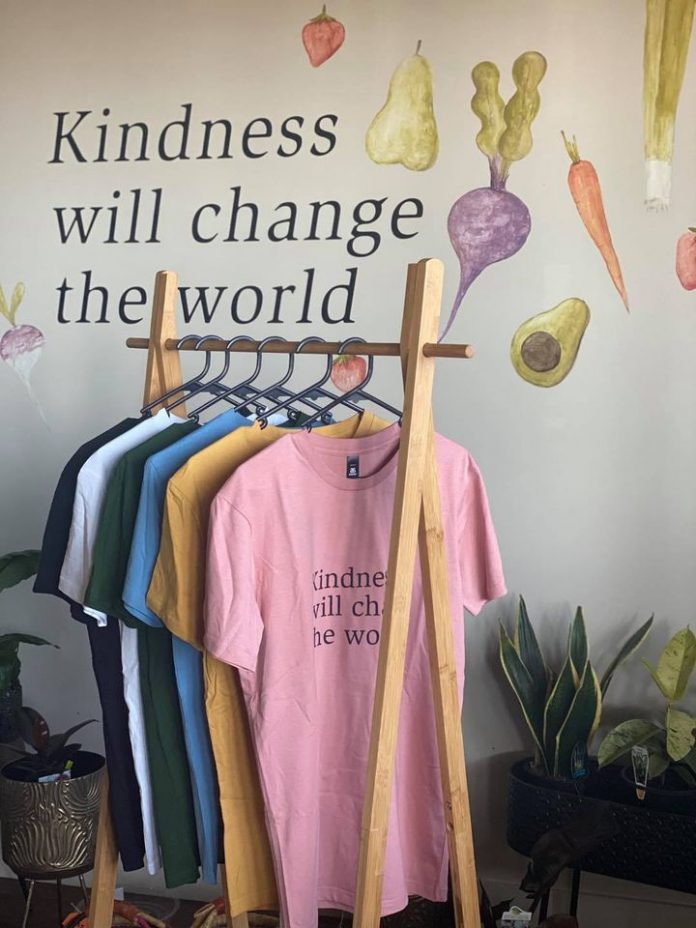 Slogans on t-shirts are not a new trend, but a project between a local cafe and screen printer is using the humble wardrobe staple to spread cheer and raise funds for a worthy cause.

Raw Harvest Cafe director Lizi Maskiell initially commissioned a mural for the eatery which reads ‘kindness will change the world’, and it fast became a mantra for staff and spread to other areas of the business.

“It’s one we’ve been writing on our coffee cups for a while and a little phrase that gets around the shop quite a lot,” Ms Maskiell said.

“We had such a great response that we thought ‘let’s try some t-shirts to try and brighten up peoples’ days and spread some love’.

“I had a chat with Bryce and he was happy to jump on board and we thought ‘what better organisation to give the the proceeds to than Lifeline?'”

Since first rolling out the ‘kindness will change the world’ t-shirts last month, 120 have been sold, with all profits going towards Lifeline.

“When we delved a little deeper we realised they’re quite underfunded and relied a lot on their op shops for funding coming in.

“So we thought it was really important to try and give back to them.”

Two batches of the t-shirts sold like hotcakes, with a third in the works soon available for pre-order.

“When we first got them in people jumped on them and they were gone in a couple of days,” Ms Maskiell said.

“We’re taking pre-orders for a third batch and hopefully we’ll raise even more money for a really great cause.

The t-shirts, which come in a variety of colours, have been shipped off to people all across the state as a pick-me-up gift.

“Lots are being posted out to people in lockdown in Melbourne … family and friends who have siblings doing it tough are sending them off, which is really beautiful to see,” she said.

They are available for pre-order by phone the cafe on 5127 4609 or message Raw Harvest on Facebook.