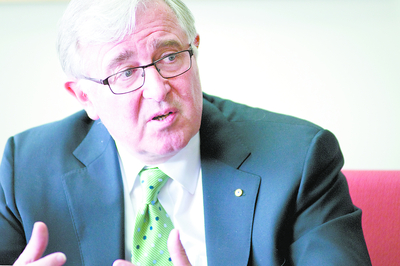 CONTRARY to a top education union’s concerns, Monash University Gippsland will continue towards an upward trajectory of success according to the university’s top administrative head.

Fears expressed by the National Tertiary Education Union regarding the future of the Gippsland campus, as it adopts a unique operational model, were put to rest by Monash University’s Vice Chancellor Professor Ed Byrne.

“People are understandably concerned about any change and they’re concerned that this is a downsizing – but it’s not – it’s far away from that as it could be,” Prof Byrne said.

“All I can see in this (decision) is an upside and it’s very likely to lead to significant growth of the (Gippsland) campus in the years ahead.”

Prof Byrne who visited the Gippsland campus recently, was met by staff and union members as they questioned the viability of Monash’s decision to create a more autonomous Gippsland campus.

This decision follows the release of the State Government-funded Gippsland Tertiary Education Plan, which called on the separation of the Gippsland university campus to become a university college.

However, Monash University dismissed this key recommendation in favour of catering to a similar model by continuing to recognise the campus as a university while providing it with more autonomy.

According to Prof Byrne the decision came under light of committing to give the Gippsland campus the best model it needs.

“We’re saying that we’re committed… to give this campus the autonomy it needs by continuing to support the campus 100 per cent as part of Monash University and we believe that will be a better outcome,” he said.

“Monash University is 100 per cent behind this campus… but we’re not going to restrict the campus unnecessarily in its growth to be a fantastic regional campus – even better than it is now.”

Easing fears of separation, Prof Byrne said he guaranteed the university would not become a college during his reign as vice chancellor, adding “we want this campus to be 100 per cent part of Monash University for the foreseeable future”.

He further added the university would “continue to have financial responsibility for this campus in the same way as we do for all of the others”.

According to the NTEU Monash University branch industrial organiser Liz Schroeder fears continued to exist among its members.

“There is so little detail about how management envisages their proposal would work that members are understandably anxious,” Ms Schroeder said.

“NTEU believes strongly that if a change in the campus governance structure occurs, it must only occur after a thorough and widespread review of a range of options in which all stakeholders participate.”

Following discussions with the Monash University council, the university will commence a 12-month consultation process to seek input into the university’s proposal – a move welcomed by the NTEU.