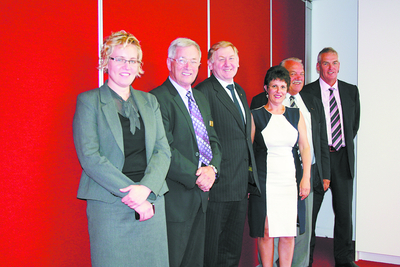 A NUMBER of large international companies are in detailed discussions with all levels of government about future Latrobe Valley-based operations, but government leaders have warned none offer job prospects in the immediate future.

Federal Resources, Energy and Tourism Minister Martin Ferguson was back in the Latrobe Valley this week for continued talks with Latrobe City Council about low-carbon transition arrangements and the looming contracts for closure process, likely to see a local power generator shut down by around 2020.

Asked whether his continued visits to the region would translate to tangible employment outcomes in the Valley or were little more than a ‘talk-fest’, the Minister was adamant various potentially large-scale projects were on the region’s horizon but acknowledged long-term timeframes applied.

Speaking with The Express, Mr Ferguson indicated he had undertaken detailed, and recent, talks with Ignite Energy Resources, Exergen, MDB Energy, Latrobe Resources and Mitsubishi about a range of brown coal-related projects for the Valley.

The content of those discussions were mostly bound by confidentiality arrangements, but Mr Ferguson maintained they were “progressing” and “most importantly…show there is a view in industry that the Valley’s got a future”.

The Minister challenged suggestions local companies were already struggling as a result of power industry cuts made in anticipation of the carbon tax.

“I know what Darren Chester is saying, and in his own way he is talking down the Valley… he is saying that companies are making dramatic changes to their maintenance but that’s not what is being put to me by the companies,” he said.

Though recent weeks have seen LYP chief executive Ian Nethercote confirm the company would seek continued “cost-efficiencies” in its maintenance activities, Mr Ferguson insisted his talks with generators did not indicate maintenance was being pulled back.

“And what you have (happening) with manufacturing and engineering is the problem of the dollar…it is impacting on Geelong, and understandably on the Valley,” he said.

In response to suggestions Hazelwood Power Station was unlikely to maintain previous maintenance-related spending levels if it was scheduled for closure by 2020, Mr Ferguson referred to National Electricity Market rules which applied to the maintenance requirements of generators. He added transitional assistance to generators over the next five years would ensure “they can maintain their assets, because we want reliability”.

The minister cited the recent announcement of AGL Energy that it intends to increase its stake in Loy Yang A to 100 per cent as “a commercial decision which, in my opinion, is the strongest statement you can get from industry that the Valley’ s got a future.”

“Why would AGL be making that investment claim if it didn’t think it was here to stay?” he said.

“And I put it to you that they are not about to run their asset down.”

When asked how the government intended to support the Valley in the years between a possible power station closure and the implementation of long term and untested ‘clean coal’ projects currently on the table, Mr Ferguson was less forthcoming.

He did say, however, that one local company had already indicated to him that “if a competitor was to close” it would look to “pick up some additional labour for its operations”.

Yesterday Latrobe City mayor Ed Vermeulen acknowledged there was a “gap” in those timelines but said “we are building on that by encouraging projects of diversity as well”.

He referred to council’s efforts to secure urgent Federal Government funding to assist with the expansion of aerospace manufacturing at GippsAero as its “number one priority”.

Mr Vermeulen confirmed a number of companies, including some “very large international ones”, were currently assessing local project opportunities to do with “coal, power generation and other things as well”.

“We are interested in anything that will bring jobs to Latrobe and Central Gippsland..I am not fussy where they come from and I am not as concerned about only getting well-paid jobs,” he said.

“I would like to see the jobs first, then build on that.”

He said possible projects in the pipeline would not “start tomorrow” but would be at least four to five years away to “even getting a pilot plant off the ground”.

Feasibility, seeding capital, pilot and full-scale processes needed to be adhered to “or (project proponents) can’t get finance”, he said.

Mr Vermeulen and Mr Ferguson said they anticipated the Valley would secure “significant compensation” dollars from the government’s Energy Security Fund in “the medium-term”.

Mr Ferguson said most of an initial $1 billion allocation from that fund would go to the Valley’s generators before the end of this financial year.

Mr Vermeulen said he was confident compensation dollars would support industry and “the community overall”.

Mr Ferguson said he understood the current “sense of uncertainty in people’s minds” in light of the region’s previous experience with privatisation and admitted there was “no magic bullet to solve things overnight” but he insisted neither the federal or state governments intended to desert the region.