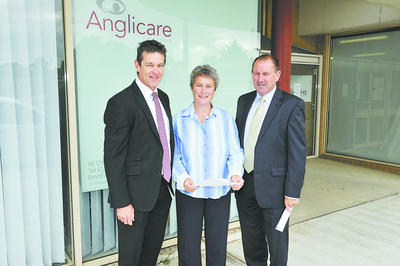 ANGLICARE Gippsland’s campaign to tackle the increased demand for its Child Family Information Referral and Support Team service for vulnerable children and their families has received a State Government injection of several million dollars.

As an initial response to recommendations in the Protecting Victoria’s Vulnerable Children Inquiry, tabled in state parliament last week, local state MPs announced $2.3 million over four years to Anglicare for the expansion of Child FIRST services in Baw Baw and Latrobe.

Anglicare Gippsland area manager Jane Anderson said the increase in funding would help her organisation, the lead agency of a family service alliance in Gippsland, to recruit more staff, expand a “coordinated sector response” to families and improve the service’s response to different cultures.

She said demand for the Child FIRST service was so significant that “for a period of time last year we had to restrict services and we do have waiting lists”.

She said though there were always “peaks and troughs” in demand, it had been “steadily increasing over time”.

Ms Wooldridge said a referral to Child FIRST helped support identified families “to engage with relevant services to get help before the vulnerability escalates and potentially results in child abuse or neglect”.

Ms Anderson said factors contributing to demand on the local service included “a high amount of disadvantage in the area and an increase in complexities within families”.

She said an across-the-board increase in family violence and mental health issues meant it was now “harder to work out the best way to respond to, and support, families”.

In regional areas educational achievement is also a factor, she added.

A rise in family violence reports, which Ms Anderson attributed to an increase in public awareness, was welcome but had also stretched Anglicare’s resources, she said.

State Member for Morwell Russell Northe said the government had identified the funding need quickly and was “delivering immediately to support the program”, while State Member for Narracan Gary Blackwood said the early intervention and prevention aspects of the Child FIRST program were “vital”.