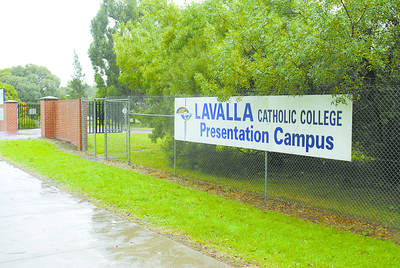 The school recently announced, as of next year, it would transfer all of its Presentation campus students to its larger St Paul’s campus in Traralgon, creating claims among Latrobe Valley residents the idea had been in the making for a number of years.

However, Lavalla Catholic College principal Erica Pegorer said these claims were “not true at all”.

In an interview with The Express, Ms Pegorer said the viability of the Newborough campus catering to no more than 60 students was looked into by the school “only as of late last year”.

“People say that (this decision) was inevitable, but in terms of our own decision making we only thought about it last year,” Ms Pegorer said.

“Our decision was solely an educational-based one – our priority is to provide the best education and we believe we can do that at our St Paul’s campus.”

In a letter sent to parents last week, the school highlighted its low student numbers at the Newborough campus as unsuitable for adolescent growth and social development.

According to Ms Pregorer, the majority of parents expressed support for the school’s move at a private meeting with parents held on Monday.

“I was quite impressed with the parents’ support, particularly their love of the campus, and we’re trying to do everything we can to support that,” she said, adding the school was still keen on maintaining the campus.

Effective next year, the Presentation campus continue to host the school’s Master Survivor Program – ear marked by the principal as “vital and unique to our year nine curriculum”.

As part of the transition to the larger St Paul’s campus, Ms Pregorer said the school would facilitate tours for both students and parents to get them “further acquainted” with the Traralgon campus.

A parent of a Presentation campus student who did not wish to be named, said while the private meeting held at the school on Monday did not receive many verbal comments from the parents present, most saw the school’s move as “a positive one”.

“The kids are going to end up in Traralgon eventually so it’s just earlier rather than later,” the parent said.

“I think what we were all concerned about is the campus itself – no one wants to see it go into disarray like the old Moe campus.”