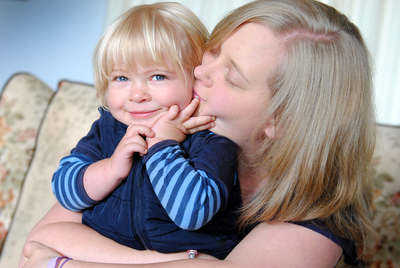 VINCENT Gange suffered his first epileptic seizure at just three months of age, but the happy toddler does not let his illness affect his high spirits.

Twenty-two month-old Vincent was diagnosed with epilepsy at just six months after experiencing recurrent tonic-clonic seizures, a type of generalised seizure which affects the brain.

Mum Anne Sedgman said she had little understanding of the illness at the time of his first seizure.

“All I knew, was what I had seen on television, and the experience came as a severe shock,” Ms Sedgman said.

“I’ve since learnt that there are a lot more types.”

Last year was a tumultuous time for the family with them experiencing five Helimed trips to Monash Hospital, Melbourne after Vincent suffered seizures so severe local paramedics were unable to stablise him.

“From May to August he went to Monash three times, every five weeks; that was the worst time,” Ms Sedgman said.

Following the formal diagnoses at six months, Ms Sedgman said there was a feeling of “lets get on with it”, ensuring the family were equipped to with support Vincent through his illness.

“(During) his first seizure I didn’t know what was going on; it was a bit hard to deal with because we had no idea what was happening,” she said.

“After (the emergency department) said it was a possible focal seizure, I knew what to look for.”

The Victorian Epilepsy Foundation provided an emergency training session for the family, including Vincent’s grandparents, which was a “vital” experience for those closest to Vincent.

Despite his daily anticonvulsant medication and unpredictable seizures, Ms Sedgman described Vincent as a happy, affectionate toddler who loved playing with his older brother Lucas.

“He is just like any other kid,” she said.

“He has days he will be full of energy, others where he is very lethargic, but I guess all kids are like that.”

The determined toddler does not let the side effects of the medication, which includes an inability to sweat and possible speech delay, affect his playful attitude.

“He goes to playgroup and can socialise but struggles to verbally express himself,” she said.

For parents who suspect their child has epilepsy, Ms Sedgman urged them to film a seizure.

“The best thing that I did in the early days, when he was having the focal seizures and with the first few generalised tonic-clonics, was I videoed them,” Ms Sedgman said.

“With the focal seizures they only lasted 20 minutes and that wasn’t enough time for the paramedics to get here. I knew that the best thing to do was video so the doctors could see what was going on.”

Now becoming more experienced with dealing with the seizures, Ms Sedgman said it was now becoming a “planned process”.

“I wouldn’t say it is daunting; I have a check list in my mind of things to do and I just go through the motions,” she said.

Ms Sedgman said she met with other parents of children with epilepsy through Epilepsy Parents Australia on Facebook, which led her to establish a local support group.

An epileptologist will determine in May whether Vincent suffers from an extreme and rare form of epilepsy called Dravet Syndrome.