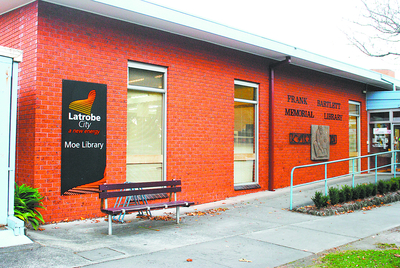 TEN years after the Morwell and Traralgon libraries were upgraded, Moe library users will still wait up to five more years for their own improved services.

Latrobe City chief executive Paul Buckley rejected comments the Library Strategy Plan 2006-2011 guaranteed library improvements and said the commitment within the plan was to “investigate options” for the future provision of library services.

Moe and Districts Residence Association secretary Cheryl Wragg said it was “unfair” the Moe community was the only major town in the municipality past decade which had not received a major upgrade in the past decade.

“The Moe library is one of the most used libraries according to the council’s own measurements, it is heavily used and it is a much-loved facility,” Ms Wragg said.

“Nothing has been done to improve the facility.

“The community is very patient but it is being expected to wait an inordinate amount of time for this necessary upgrade to happen.”

In 2009 council voted to include the Moe library in the Moe Activity Centre Plan as part of the “iconic” community hub, which would require a relocation from the existing Kirk Street site to the rail precinct.

Council is expected to apply to state and federal governments for about $20 million of funding to continue the construction of the project which Mr Buckley anticipated would be completed within three to five years.

However, Ms Wragg said it was an “irresponsible decision in today’s economic climate”.

“In the current constrained financial environment it is looking most unlikely that the State Government will fund the railway corridor project, it would be a much more realistic ask for the Kirk Street site to be upgraded,” Ms Wragg said.

She said MADRA estimated the existing site could have been integrated with the Council Service Centre as part of a “significant” upgrade for around $3 million, the amount so far spent on planning and acquiring rail precinct land.

“Council should be using the building that was built for that purpose and taking advantage of the design to be extended into the future – why not use the resource if it is there?”

However, Mr Buckley said council’s current position was to pursue funding for the Moe rail precinct project, incorporating the library and community facilities.

“Since 2009 when council resolved on the option for the future of the library (to incorporate) it into the rail precinct project, that’s when it started the clock ticking to say ‘okay, from then how long is it going to take to get an upgrade to that facility’,” he said.

Mr Buckley said council had no contingency plan in place as they “had a very clear position” to pursue the MACP development.

“There is no alternative option at this stage,” he said.

According to Mr Buckley, council “grasped the opportunity” to turn the 1950s building into a “state-of-the-art” community facility.

“We had the opportunity, through the broader revitalisation plan, there was an opportunity to develop an iconic community facility in the middle of town that can be a catalyst for ongoing private sector investment, you don’t let those opportunities go,” he said.

Following the completion of the detailed plan, expected by 30 June, council will begin advocating funding submissions for the project to the state and federal governments.

“We will work with the State (Government) closely to facilitate those allocations to ensure those applications are going in to the right pools (of funding) at the right time, to make sure we can pull it all together,” Mr Buckley said.