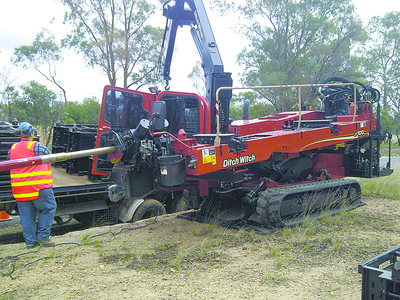 A TRARALGON company has trumped businesses from across the state to successfully win a multi-million dollar Gippsland project.

Maffra Trenching and Boring has been awarded a $3 million contract with Gippsland Water to build a pressure sewer transfer main between the future Glenmaggie pump station and the Heyfield Wastewater Treatment Plant.

According to MTB general manager Julie Mack the project signalled “trust in our local companies”.

“It’s fantastic to be given this opportunity by a local company,” Ms Mack said.

“It helps boost our confidence and has enabled us to invest capital in plants and equipment, and gives us confidence in our systems.”

Ms Mack sad the company had employed local contractors to work on the project, adding additional job vacancies had opened as a result of winning the Gippsland Water project.

“We’ve just got stage one of 13 stages of the project, but we will be putting up an application for the next stage and are hopeful of success,” she said.

“We’re quite excited about embarking on such a significant project.

“It’s also given our staff a bit of morale boost especially after what happened to Kirway (Constructions) and other businesses.”

Ms Mack predicted a positive future for Gippsland, adding with the right technology and resources, it would be able to generate new technology which could appeal to a wider market.

According to Gippsland Water the Coongulla Glenmaggie Sewerage Scheme, estimated to cost $22.45 million in total, will introduce reticulated wastewater services to more than 300 Gippsland properties.

“This key contract is a step forward in delivering this important project, as it is the first significant construction work package,” Gippsland Water managing director David Mawer said.

He said the scheme hoped to create jobs in the region and help boost Gippsland’s economy.

MTB’s stage one of the project is expected to be completed by the end of June, with the complete sewerage scheme planned to be operational by 2013-2014.

The Coongulla Glenmaggie Sewerage Scheme is being delivered as part of the State Government’s Country Towns Water Supply and Sewerage Scheme Program, with the Victorian Government contributing $785,000 towards the project.