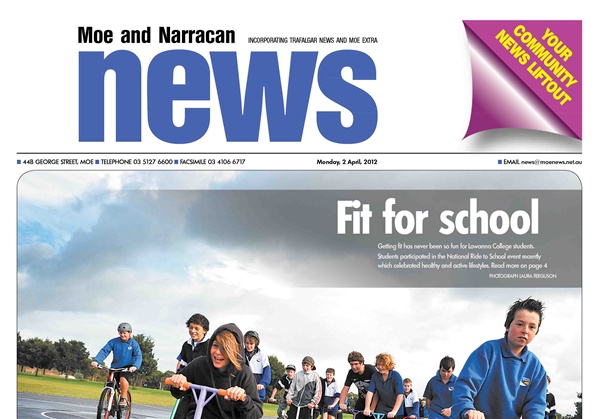 THERE is still no sign of a pedestrian refuge, six months after Latrobe City Council promised crossing improvements to a busy section in Albert Street, Moe.

Moe Returned and Services League members have been lobbying for the pedestrian refuge outside the venue in Albert Street for more than a year and were notified in August of the anticipated completion in October.

Moe RSL president Ray Watson said the crossing was “vital” for the safety of the venue’s patrons.

The crossing upgrades include a pedestrian refuge, two kerb and channel islands in the middle of the road adjacent to the RSL.

Opposite the RSL a “blister-type kerb” will include a ramp and footpath that joins up to the existing footpath, which runs along Albert Street.

“I had a letter at the end of August assuring (us) all the works would be completed, including the car parks around the back,” Mr Watson said.

“The car park has been done but the pedestrian hasn’t been touched.

“It’s absolutely necessary to have the pedestrian refuge completed, the amount of times we have seen near accidents because the oldies are going at a snail’s pace and have almost been hit, knocked over or killed.”

Mr Watson said he received a letter of support from the Tanjil Place Medical Centre, situated opposite the RSL, to help their patients cross the road.

“A lot of their patients come wait in the RSL and have a cuppa once they are off the bus; a lot of people need that pedestrian refuge,” he said.

Early last year, former Latrobe City mayor Darrell White, together with councillors Lisa Price and Sharon Gibson, attended the RSL with engineers and committed to a safety island in the centre of Albert Street.

“It will be a spot for the elderly to walk to the middle of the road, rest and continue on when there traffic allows them to,” Mr Watson said.

“The road has always been a worry for us because we are dealing with an age group from mid 70s to mid 90s.

“The sooner it is done, the better for everyone.”

Latrobe City infrastructure and development manager Damian Blackford said council had faced challenges executing the project as it was not included in the past financial year’s capital works budget.

“It was an addition to that (capital works) program late last year. Initially the estimated cost was about $25,000; when the detailed design plan came back it was twice that amount,” Mr Blackford said. He said council acknowledged “there is an issue” and a need for an improved crossing on Albert Street.

“We didn’t plan for it, it wasn’t budgeted for; that has lead to some issues in the delivery but we are hoping to start the works very shortly,” he said.

The pedestrian refuge has been estimated to cost about $50,000, Mr Blackford said.

Once the tender process closes 12 April, construction would start “soon after”, he added. “We expected this to be done last year but our commitment is that we know it needs to be done and we are doing it as quickly as we can, on top of our existing programs,” Mr Blackford said.