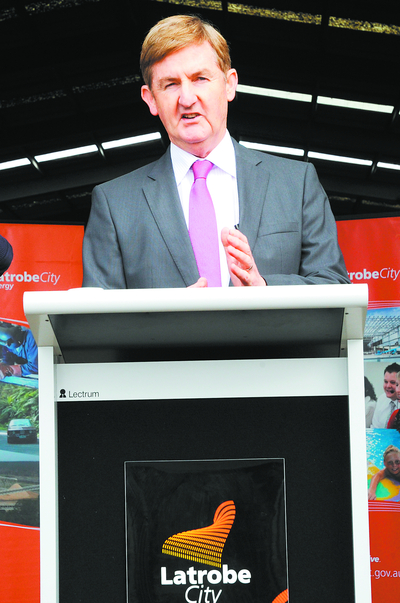 WORK on a ‘roadmap’ for the Latrobe Valley’s future development, steered by the State Government, is progressing well, according to Deputy Premier Peter Ryan.

The Latrobe Valley Industry and Employment Roadmap seeks to build on the State Government’s $30 million Latrobe Valley Advantage Fund, $25 million of which was allocated under the previous government, and co-ordinate assistance programs to the region.

When asked recently what had so far been achieved by the Roadmap, Mr Ryan told The Express the process had led to the establishment of the Latrobe Valley Transition Committee.

That committee was currently seeking community, business and industry views on the region’s future economic development priorities through a formal submission process, he said.

The $10 million Latrobe Valley Industry and Infrastructure Fund, part of the LV Advantage Fund, had also been set up for projects aimed at stimulating economic activity and creating jobs, Mr Ryan said.

So far $1.5 million of that sum had been allocated to Latrobe Regional Airport upgrades with “further announcements to be made in the near future”.

Widespread access to subsidies for workers seeking to retrain or upskill had also been provided as part of a ‘Skills and Training’ component of the LV Advantage Fund, Mr Ryan said.

A $217,000 research and development grant was provided for consultants Hot Dry Rocks to establish a 500 kilowatt pilot geothermal plant in Maryvale by the end of this year.

Mr Ryan said geothermal energy had been “highlighted as having vast potential” in the Valley.

Mr Ryan called on the Federal Government to invest in the “building blocks for future productivity and growth in the Latrobe Valley”, citing projects including Growing Aerospace Manufacturing and the redevelopment of Latrobe Regional Hospital as two of several requiring immediate support.