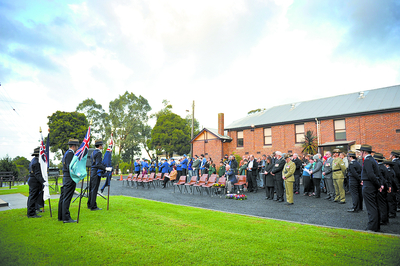 IT is ironic that in the fields of Gallipoli 97 years ago, Australian soldiers fought and died among the perfumed scent of rosemary, growing wild in the fields.

The crowd that gathered in Tyers for its 11th Anzac Day commemorative service yesterday held the crushed ‘herb of remembrance’ in their hands as they honoured Australia’s diggers.

The small community was moved by a tribute from local resident Andy Hammond to his pop, Ernest Gordon Kempton (‘Wiggie’) who saw years of active service, and was awarded an array of medals and exemplified the Anzac spirit until he recent death at the age of 94 years.

Mr Hammond, who did not get to know his birth mother and his maternal grandfather Wiggie, until he was in his 40s, paid a moving tribute to his pop who among many of his wartime battles, endured the loss of his brother on the Kokoda trail, just 200 metres away from him.