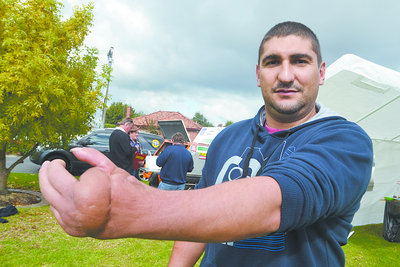 MOE’S Allan Buhagiar laid trapped for 30 minutes, as rescue crews scrambled to free his arm from underneath a six-tonne door.

Moments earlier, he had tried to save the life of a co-worker who was killed by the falling door.

“The bloke’s a hero, with what he tried to do; a real credit to the workers of the Latrobe Valley, putting himself in that personal risk, and it’s one that he’s paid the penalty for,” Australian Manufacturing and Workers Union organiser Steve Dodd said.

The accident happened on 9 December 2006, during an outage maintenance program at Loy Yang A.

A rigger by trade, Mr Buhagiar was installing walkways, as 26 year-old fitter Scott Thorburn was replacing the sealing of a large doorway.

Mr Thorburn worked in the three metre by three metre opening, as a vertical door hung precariously above his head.

“Originally, there were three safety devices in place ensuring the door would not move, but somewhere along the line after years of maintenance and changes of staff, the devices must have gradually been disabled,” Mr Buhagiar said. But at the time, the workers were none-the-wiser, and as he looked across at Mr Thorburn, he saw the door move slightly.

“‘It’s not supposed to do that’ I immediately thought to myself; from there, it was instinctive, just pure reflex,” he said.

Mr Buhagiar said he called out, lunging in Mr Thorburn’s direction, but in a split second, six tonnes of solid steel came crashing down.

After being airlifted to Melbourne, and a 13-hour operation for his “crush amputation” injury, Mr Buhagiar was put into an induced coma for three days.

Fifteen operations later, he now has part of his thigh muscle attached to his hand and plates on his four remaining fingers. Trauma and pharmaceuticals have induced scarring of his heart muscle, while his liver has been damaged in a rare allergic reaction to anaesthetics. Mr Buhagiar returned to work in 2009, but by March the following year, his presence in the workplace was bringing about post traumatic stress disorder, and he has not been able to return since.

“I still jump when I hear loud noises… simple things like hearing a helicopter in the morning still makes me anxious and nervous,” he said.

At the time of the accident, he was asked by his five year-old son, “Dad, promise me next time that happens you’ll run away”.

Mr Buhagiar has limited movement in his left arm, and currently cares full time for his three boys at home; however, he said it has been a rough road to recovery. He still travels to Melbourne for hand therapy, and has lost contact with most of his old workmates, who have distanced themselves since the accident.

“People don’t know how to cope with horrific accidents; it’s been a difficult time for me,” Mr Buhagiar said. “There’s so many ‘what ifs’; what if I had’ve waited an extra second, what if I had checked his job; it’s always on my mind.”