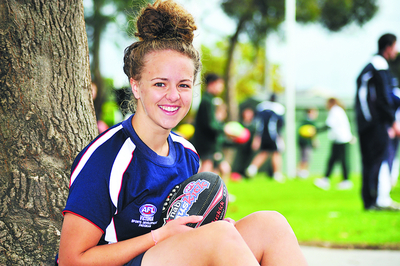 With two Victorian Australian football teams to her name, Monique Tracey is far from your average teenage girl.

The 16 year-old sports enthusiast from Traralgon was recently selected for her second state girls youth squad.

“I used to play basketball as well, but now it’s just footy and golf,” she said.

Monique was introduced to football through her father and uncle and first played competitively in 2009. She currently plays for Diamond Creek in one of Melbourne’s four female Aussie rules competitions, and has been selected to represent the Melbourne Metropolitan team at the state championships in late May.

“I head down for training once a week and I have a program that I follow at home as well,” she said.

However it may not be long before Monique can play closer to home. AFL Victoria is currently working in conjunction with the Gippsland League to establish a competition for girls aged 13 to 18 years in the Latrobe Valley.

AFL Victoria’s female development manager, Chyloe Kurdas, said a competition could be in place as early as school term three this year.

“This year it would probably be a six-week season with the view to extending it in later years depending on how many teams there are,” Kurdas said.

“Girls competitions are already established in Melbourne, Ballarat, Bendigo and Warnambool and we’re also looking to get one going in Albury/Wodonga. Kurdas said AFL Victoria aimed to have a girls’ competition established in every regional centre by 2016.

If an opportunity arose to play in Traralgon, Monique said she would “jump at the chance”.

“I’d still have to go to Melbourne for Victorian squad training, but to have a league here would be amazing, I know quite a few girls who’d be keen,” she said.

In the future, Monique said she would like to work as a physical education teacher, or do something involving sport.

Studying at the Sports Education and Development Australia school in Traralgon, Monique said she was in the right place to learn about the industry.

“We recently completed a level one coaching course because we take clinics at primary schools,” she said. “I’d love to pursue footy; one of the coaches at the last state squad training said he thought there would be a women’s AFL by 2020.

“If that happened, I’d be over the moon.” But for now Monique is focusing on her role in the state squad and improving her game.

For more information on the girls competition phone Chyloe Kurdas at AFL Victoria on 8341 6042.