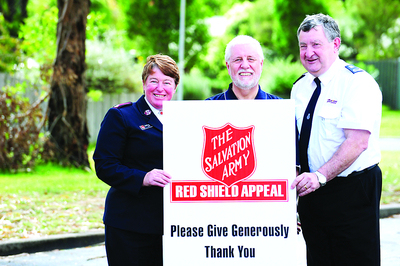 THE Salvation Army has called on Latrobe Valley’s youth to lend a hand in its annual Red Shield Appeal Doorknock this year to help achieve a target of $35,000 for the region.

Church ministers and corps officers from Moe, Morwell and Traralgon said they hoped to have 60 volunteers in each major town to man street intersections and shopping centres.

“Our volunteer numbers are down, due to attrition…many of our volunteers are also older people,” Morwell-based Major Stacey Cotton said.

“It takes massive teamwork; we are appealing for younger, enthusiastic volunteers to lend a hand.

“While (the youth) may not be able to hand out welfare, their help (in appeals like these) will allow our work to continue.”

Major Graeme Bright, who oversees Traralgon, reminded young people there were people living on their local streets who may need assistance.

“All the money collected during the Red Shield Appeal goes to welfare work and not the church,” Major Bright said.

“Demand (for assistance) goes up every year, and we are asked to do more with less.

“By coming out to help, people are making a difference; by sitting at home they would not have had an effect on anyone.”

Major Cotton said, in a worrying trend, more people who were employed were also seeking assistance to cope with higher costs of living.

“We don’t want to turn anyone away,” she said.

Meanwhile, Major Malcolm Daddy, who is based in Moe, urged young people to “give a couple of hours of their time” to help others throughout the year.

“For the first time, last year we had a telemarketing company help us make calls; Moe, Churchill and Traralgon will hopefully be telemarketed this year, too,” Major Daddy said.

According to its internal statistics, from the start of 2012 to 2 May, 642 people received assistance from its support services.

The Red Shield Appeal activities will primarily take place this Saturday and Sunday, but local corps officers said they will kick off their work in the lead-up to that weekend.

Nationwide, the Salvos hope to mobilise 100,000 people to volunteer their time during the doorknock weekend.

In a typical week across Australia, the Salvos provide about 50,000 meals for those in need, support for 500 victims of domestic abuse and assistance for thousands of families.

To find out more about volunteering, phone