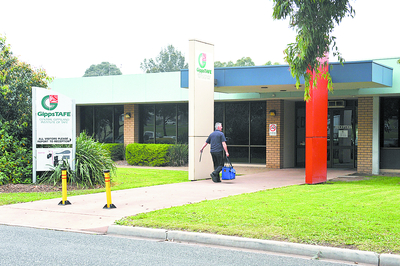 CENTRAL Gippsland Institute of TAFE has been left “frustrated” after a meeting with the State Government resulted in a lack of definitive solutions.

The education institute has been left to face the consequences of more than a $100 million reduction to the TAFE sector, in the aftermath of the state budget.

What was described as an “amicable” meeting between GippsTAFE administrative heads and Victorian Skills Minister Peter Hall, concluded with “limited outcomes”, according to GippsTAFE chief executive Peter Whitley.

“It is fair to say not a lot of specific details were revealed so that was somewhat frustrating,” Mr Whitley said.

“The discussions looked at assistance in the future if possible, but nothing forthcoming.

“The government would expect us to work together (with them), but find the solutions ourselves.”

Mr Whitley said GippsTAFE was looking at discontinuing courses and making about 35 staff redundant within the next two months.

Students looking at enrolling into courses at the institute in July, recently received notification there have been “massive changes… with the recent government budget being released”.

Correspondence with GippsTAFE and future students also showed enrolments currently at the ‘quote for fee stage’ “have to be put on hold”, warning students they would fall under a new fee structure.

Meanwhile, Gippsland’s apprentices will stand to benefit from the state budget, but at the cost of possible discontinuation of non-apprenticeship courses.

According to Apprenticeship Group Australia employment and training manager Phil Backman, the institute will receive an average increase of 30 per cent funding.

Mr Backman said the institute, which felt it was “under funded” in the past, would now give apprentices more employment opportunities.

“It’s all very positive for us but we’re very conscious of the affect it has on our TAFE colleagues and we’re very sympathetic towards them; they play a very important role in the community,” Mr Backman said.

“The change in the funding model provides new opportunities for us… and the losses we were previously incurring will not be so severe.”

Mr Backman said AGA would be in a position to handle an increase in enrolments if local TAFE providers were to close its doors, but hoped it was an avoidable scenario.