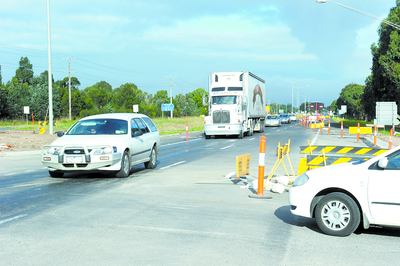 LATROBE Highway Patrol have appealed for drivers along the Princes Highway outside Latrobe Regional Hospital to slow down in light of the ongoing roadworks and wet weather conditions.

Following a multi-car collision outside the hospital on Friday evening, leading senior constables Ellane Clarke and Peter Olorenshaw have urged drivers to pay attention to reduced speed limits along the stretch of road to prevent more accidents from occurring.

“A likely cause (of collisions) appears to be people losing concentration and possibly not slowing down for the posted speed limit through roadworks,” Ldg Snr Const Clarke said.

“Drivers (who speed) are not just putting themselves at risk, but other road users and workers trying to do their work.”

Ldg Snr Const Clarke added she had attended numerous collisions near the stretch of roadworks in the past two weeks, and urged road users to pay attention to signs, allow other road users to merge into the single lane and allow more time for travel.

Ldg Snr Const Olorenshaw said the “long drawn-out” roadworks may be a contributing factor to the accidents, in addition to the reduced speed limit.

“The diversion of two lanes into one, after the freeway merges on to the road heading into Traralgon can also be confusing to those who do not know the area,” Ldg Snr Const Olorenshaw said.

The roadworks are part of a $2.4 million upgrade to the intersection of the Princes Highway and Airfield Road.

Works to the area include the installation of traffic lights, changing the arrangement of turning lanes onto Airfield Road, and improvements for pedestrians, including crossings and footpaths to bus stops.

The roadworks are expected to be completed by end-June.

State Member for Morwell Russell Northe, who announced the funding for the upgrades in March, said he was not aware of any possible delays in the completion of the project.

“As far as I understand, works are still on-track to be completed,” Mr Northe said.

“There is a massive amount of traffic on that section of road and I understand it is an inconvenience for many people, but it is one of those situations where there is some short-term pain for hopefully a long-term gain.

“It’s a timely reminder for motorists to be careful.”