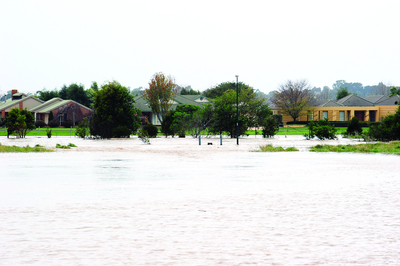 A POST-flood mop-up is underway in parts of the Latrobe Valley after rainfall recorded at surrounding bureau stations this week hit the highest levels seen for many years.

A 24-hour deluge hit with force over Monday and Tuesday leaving some Traralgon residents with little or no time to evacuate despite a State Emergency Service alert to more than 100 homes in the early hours of Tuesday.

The speed with which floodwaters rose caused chaos, particularly in Traralgon where the Traralgon Creek reached flood levels of more than five metres.

Yesterday SES teams were still checking affected Traralgon homes and numerous residents had been re-housed pending an assessment of the damage of their homes.

About 45 homes were flood affected, with the extent still unknown, and 34 people had registered to a relief centre at Traralgon’s Performing Art Centre, coordinated by the SES ICC and run by the Red Cross.

Bureau of Meteorology data showed the Traralgon Creek Koornalla bureau station recorded 89.6 millimetres of rainfall on Tuesday. During periods of local flooding over recent years, that figure had not reached higher than about 66mm – recorded in March 2010. In February and April last year, figures of 52.4mm and 62mm were recorded at that station.

A BOM spokesperson said although figures of 200mm had been quoted for Gippsland, this data was recorded in the ranges, predominantly in Reeve’s Knob where 203.4mm fell. Bureau stations closer to Traralgon showed about 40mm of rain fell on the town on Tuesday.

In Morwell, an inundation saw Eel Hole Creek rise to levels which flooded nearby roads and sporting grounds as well as some homes.

The spokesperson said that, in a wet week across the state, the largest amount of rain for the 24 hours to 9am on Tuesday, fell in West Gippsland, causing minor to major flooding in the West Gippsland catchments.

By yesterday, as East Gippsland braced itself for continued chaos, in the Valley rain had eased and river heights were falling but dozens of roads remained closed.

The SES responded to almost 80 local calls, including 42 in Traralgon. They provided evacuation assistance to eight people across Traralgon, Morwell and Hazelwood North, who were trapped in their homes. Other calls related to building damage, trees down on roads and flooding.

Yesterday VicRoads warned drivers “the nature of floods is that things can change very quickly” and called for caution “when taking routes you are not familiar with”.

It asked drivers to check the VicRoads website for updated road closure information.

The SES asked residents who had returned to their homes, especially those who had not been “given the all clear” to wear gloves and sturdy boots and “continuously wash hands and faces” due to the dangers of floodwaters. It also said residents should have their electricity checked by an electrician.