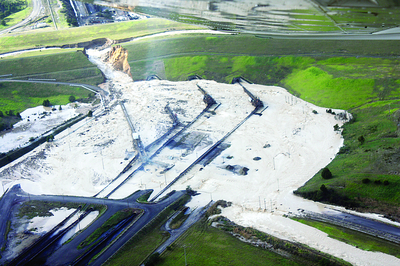 THE logistical nightmare of repairing ongoing flood damage in Yallourn’s coal mine is setting in, as the power station scrambles to find alternative means of supplying its coal-fired generators.

Millions of litres of water continues to gush into the mine today, after the Morwell River broke its banks early Wednesday morning, wiping out a coal supply conveyor belt and shutting down the remaining two.

The supply threat has forced the power station to reduce its output capacity to 25 per cent; with only one of four generator units operating, one of which is already down for maintenance.

A TruEnergy spokesperson said while coal excavation operations further east in the active part of the mine had not been affected, finding an interim solution to transport the coal to the generator remained the station’s greatest priority.

At time of going to print yesterday, moves were in place to source trucks and excavators for a “truck and shovel” haulage operation which the company hoped to implement overnight.

“We are just trying to keep the one unit going at the moment; we’ve still got backup supply in a bunker, but we have to secure that alternative supply quickly,” the spokesperson said yesterday.

“We are only 24 hours into this, it’s really too early to tell how exactly we are going to implement our response to this.”

However, it remains unknown for how long water will continue to inundate the mine, which is flowing into the open cut from two directions – the Morwell River and the Latrobe River from a nearby junction.

“As the peak of the rainfall falls away, water levels through the diversion are expected to decrease over the next day or two,” the TruEnergy spokesperson said.

The Morwell River was diverted through the mine on an embankment during a mine extension last decade, housing three conveyor belt supply tunnels plus an overburden tunnel underneath.

Mine workers were evacuated from the mine after a leak was discovered in one of the tunnels on Tuesday, after which the station began operating in a reduced capacity.

However, the situation escalated early Wednesday morning, when the Morwell River bank burst, sending a torrent of water down into the pit.

In 2007 the north side of the open cut collapsed, destroying two conveyor belts and a mining road, halting coal production and reducing Yallourn’s power generation capacity.

TruEnergy was able to divert the Latrobe River within six days of the 2007 landslip after billions of litres of water spilled into the mine.

However, Construction Forestry Mining and Energy Union energy and mining Victorian president Luke van der Meulen said due to the Morwell River already acting as a diversion itself, it was unclear how the ongoing water flow would be handled.

“Having the entire coal supply route shut down is new territory for everyone; those power stations burn a lot of coal,” Mr van der Meulen said.

“If they can’t get rid of the water fast enough, it’s going to be a really big problem; there’s a big hole in there which would provide some drainage, but it won’t be enough to get rid of a whole river load.

“How they will truck and shovel at the rate required is going to be a big issue; with the amount of trucks they’ll need, it could potentially be a big issue for the Latrobe Valley roads and everything.”

Australian Energy Market Operator spokesperson Joe Adamo said as Yallourn Power Station supplied only 14 per cent of the state’s peak demand during the summer, the incident was “small” in the scheme of the state’s power supply.

“There would have to be a number of factors working against the power network for things to go wrong,” the spokesperson said, adding there were 1800 megawatts sitting in the state’s power supply reserve.