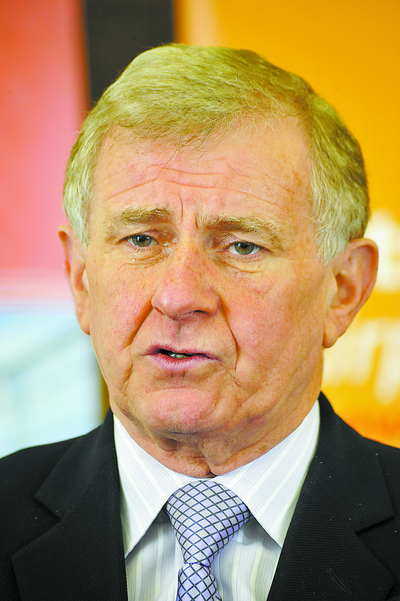 CLAIMS the carbon tax could force at least a partial closure of Energy Brix by the start of July have been dismissed by a federal minister as media manipulation.

In the Latrobe Valley yesterday for the Latrobe Regional Airport upgrade funding announcement, Federal Regional Australia, Regional Development and Local Government Minister Simon Crean told The Express the government had been in “active discussions” with Energy Brix and the industries reliant on its energy “and I think you will need to be patient”.

“Don’t listen to the doomsayers and don’t just keep repeating their message,” Mr Crean said, when asked about warnings by Energy Brix owners HRL Ltd that its business would be unsustainable under a carbon pricing regime, threatening hundreds of local jobs.

“Don’t be unwitting partners in this,” he told journalists.

The minster, on his sixth visit to the Valley in the past 18 months, also said criticism from Federal Member for Gippsland Darren Chester that the government’s $200 million Regional Structural Adjustment Assistance Program was still not finalised, was unwarranted.

The fund is “supposed to help regional areas like the Latrobe Valley adjust” to the carbon tax, Mr Chester said previously.

Mr Crean told Parliament last week the guidelines had not been finalised despite the tax being introduced within weeks.

Mr Chester has said the admission was “staggering” and heightened his concerns “that the Latrobe Valley would miss out much-needed assistance”.

Yesterday Mr Crean maintained the local “groundwork” was underway to prepare for possible power station closures in the Valley but provisions for structural adjustment money were contingent solely on ‘contracts for closure’ proceeding in the region and “one has to happen before the other”.

“As for the funding, you’ll just have to wait,” Mr Crean said. “It is not a question of guidelines, it is a question of trigger points and I think that’s something Mr Chester should understand.”

With the Valley home to some of Australia’s most intensive carbon emitters, The Express asked Mr Crean if the region deserved significant carbon tax adjustment support, regardless of potential power station closures.

“We will have a look at how the carbon tax impacts on those businesses and how we can mitigate that impact; there are many different things that can be done, including the Clean Energy funds, quite apart from structural adjustment funds, including regional health and education funds…there are a whole range of programs to support regions,” he said.

The minister maintained the Valley had “huge potential” to leverage clean energy opportunities.

While the region’s economic future lay in a diversified economic base, mining was still its “fundamental strength”, he added.

Referring to recent comments by Reserve Bank Governor Gary Stevens the Australian economy could be perceived as “glass half-full or glass half-empty”, Mr Crean said “I say in terms of the carbon pricing mechanism, ‘do you see it as a threat or do you see it an opportunity?'”

He said the Valley had “responded in a mature way” to the looming carbon tax, “and the people we have been engaging with see it as a challenge and opportunity, not a threat.”