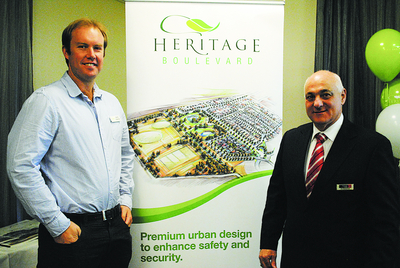 A SIGNIFICANT new development between Latrobe and Maryvale roads in Morwell over the next five to seven years may bring opportunities for employment and vocational training for local builders as well as a boost to the town’s surrounds.

Building works are expected to commence at the Heritage Boulevard residential development in about eight weeks’ time, according to developer Landgipps’ managing director David Sowerby.

“The construction arms of our business will work with local vocational groups and give local apprentices opportunities,” Mr Sowerby said.

“There will be over 60 homes under construction over the next 12 months, representing more than $15 million in work for builders.”

The development, which will span 83 acres of land comprising some 320 lots and be worth an estimated $115 million in total, will be released in 15 stages, he said.

Previously, the land, originally farm land, had not been utilised because there had been no facilities and no sewerage systems, but Mr Sowerby said since, $4 million worth of sewers had been installed since.

“There have been no prior opportunities, infrastructure, investor capital or people to do it; Morwell has been starved of opportunities for a long time and is now in a unique position to come forward,” he said.

“Traralgon and Moe have both had some (land) availability, now Morwell as a good country community has the same opportunity.”

“So far, 45 lots have been sold and there are just 15 remaining,” Mr Demetrios said.

The Heritage Boulevard development will in future include a commercial component, with Mr Sowerby saying it would likely come in stage 10, when residents had moved into the area.

“We are still refining the master plan; we want to meet the market’s needs,” he said.

“We want to build a community.”