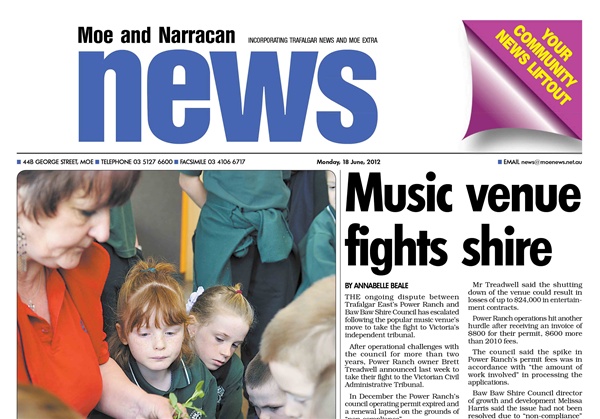 After operational challenges with the council for more than two years, Power Ranch owner Brett Treadwell announced last week to take their fight to the Victorian Civil Administrative Tribunal.

In December the Power Ranch’s council operating permit expired and a renewal lapsed on the grounds of “non-compliance”.

“We have tried our hardest to work with the Baw Baw Shire by complying with everything that they have asked however, unfortunately, it was never enough,” Mr Treadwell said.

“The last five months have been a very hard and testing time with all the preparations and legal costs involved.

“The pressure and strain that it has put on us as a family has been enormous.” Mr Treadwell said the move to go to VCAT was due to venue supporters urging the owners to “fight to save Power Ranch Country Nights”.

“After the Shire decided not to reissue our permit, we felt that we were unjustly treated and discriminated against so were given no other choice but to fight for what we believe is something worth fighting for,” he said.

The “Bring Your Own” venue can hold up to 200 patrons at any time, and has a permit to hold up to 10 events per calendar year.

Mr Treadwell said the shutting down of the venue could result in losses of up to $24,000 in entertainment contracts.

Power Ranch operations hit another hurdle after receiving an invoice of $800 for their permit, $600 more than 2010 fees.

The council said the spike in Power Ranch’s permit fees was in accordance with “the amount of work involved” in processing the applications.

Baw Baw Shire Council director of growth and development Melissa Harris said the issue had not been resolved due to “non-compliance” with Power Ranch’s Country Nights.

“Since they started having country night (in 2010), they did so without the appropriate approvals so we approached them and said they need to bring their events into alignment with the planning and building regulations,” Ms Harris said.

“We said we will give them 12 months to see how it goes and there were no objections at the time from neighbours.

“We thought we would let the owners establish themselves as responsible operators and see how it goes.” However, Ms Harris said since the initial approval of the 2010 permit, the shire had received neighbouring residents objections, building concerns and “concerns with not not keeping with a rural living”.

“One of the problems that has existed is that people don’t normally conduct these events on private residential rural properties,” Ms Harris said.

“We were supportive of the event but not in that location.

“From council’s perspective we want to support them but it is hard for us to put ourselves in a position when we are dealing with ongoing enforcement problems that are difficult to manage.” VCAT is expected to set the hearing date in the coming months, which Ms Harris said would “have the final say”.