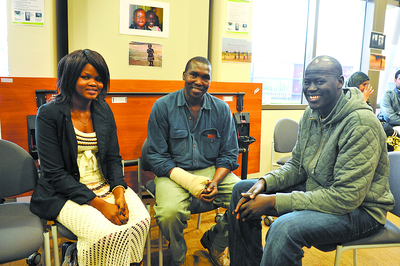 COMMUNITY members recognised the region’s attempt to “restore hope” for refugees while acknowledging their ongoing journey as part of Refugee Week last week.

Refugee Week, which coincided with World Refugee Day, is a national event to raise awareness about refugees and celebrate positive contributions made by refugees to Australian society.

The theme for Refugee Week 2012 was Restoring Hope, which Latrobe Community Health Services executive director Rachel Strauss said reminded people of the challenges and “hope” of a refugee’s journey.

“Refugees flee their homelands not only because they fear persecution, but also because they have hope,” Ms Strauss said.

“They hope to find freedom from persecution, and safety and security for themselves and their families; they hope to be given a chance to start a new life and recover from past trauma.”

Refugee Week celebrated the efforts, from service providers, to welcome refugees and new arrivals into the community, according to Ms Strauss.

“People have escaped from horrendous situations and it is about, as a society, how do we welcome, support and link them into our services, not just health services, but opportunities for education and schools, because it is often quite different to where they have been,” she said.

Events were held across Latrobe Valley to celebrate, including an afternoon tea at LCHS acknowledging the hard work by the region’s service providers.

“A lot of our refugees and new arrivals have experience and knowledge and (service providers) try and bring that into this community, as well as open our eyes to new ways of the world,” Ms Strauss said.

Currently studying to be a community worker, 21 year-old Aisha Gai said Refugee Week was an opportunity to unite.

“To me Refugee Week is about sticking together and breaking those cultural barriers to have a sense of belonging as well as a sense of acceptance,” Ms Gai said.

After seeking a safer life in Australia at the age of 14, Ms Gai said despite language and cultural challenges, the Australian lifestyle “offered more security”.

“We moved here for a better life,” she said.

“I didn’t live in a war (zone), but there was no security and now we have freedom of choice, education and a sense of independence.”

“They have the right to seek asylum but that is not commonly known due to the media often conveying different messages,” Ms Pallot said.

She said through ongoing awareness, ignorance and discrimination would be addressed.