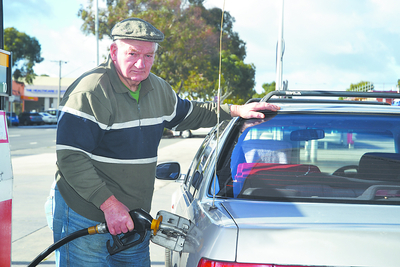 People say it is in his “Pommy blood”, and he thinks they might be right.

Morwell pensioner Jim Howes has “had a gut-full” of the fuel price differences between metropolitan areas and the Latrobe Valley, and has embarked on a one-man mission to get some answers.

“I am extremely annoyed, I can assure you; we are all being hard done by here, but if we don’t stand up for ourselves, nothing is going to change,” Mr Howes said.

“It makes my blood boil.”

Metropolitan drivers have enjoyed a prolonged period at the lower end of the fuel pricing cycle, with average prices on unleaded and gas 20 cents cheaper than Valley bowsers, and even dipping below wholesale prices at one point.

The RACV has called on the Australian Competition and Consumer Commission to investigate, labelling it a “price war” that was “unfair” for regional customers, however Mr Howes said he had no faith in consumer watchdogs.

“They have been saying they were going to do something about petrol for the last 10 years… I’ve got a bee in my bonnet now and all I want to do is fight and fight and fight,” Mr Howes said.

Turning his frustration into action six weeks ago, Mr Howes made a raft of phone calls, including contact with the ACCC, Consumer Affairs, and local politicians, however he said he was yet to receive a satisfactory answer.

“In this present situation, it seems that whichever body I attempt to contact; they all seem to pass the buck; they all say it does not come within their jurisdiction,” he said.

But Mr Howes refuses to take no for an answer, going as far as contacting the Human Rights Commission to test whether the unfair pricing could be viewed as discrimination.

“I am a pensioner, and I’m not well-educated, but that doesn’t get away from the fact I’m not entitled to my say as a person,” Mr Howes said. He said it was not the first time he would prevent regional fuel prices get the better of him; trips to the city in the past doubled as an opportunity to stock up on fuel supplies at cheaper city prices.

“By taking half a dozen petrol containers with me every time I went to Melbourne for supplies, I’d make some big savings on each trip,” he said.

“It did make myself a travelling time bomb, with all that fuel in the back, but the police never caught up to me.”

As a former union official in the power industry, Mr Howes said he felt like he was covering familiar ground, comparing his fuel price campaign to sticking up to management for the Latrobe Valley “workforce”.

And at 79 years of age, Mr Howes said he “still has some fight” in him yet, and would continue to fight “as long as it was worthwhile”.

In a statement given to The Express recently, an ACCC spokesperson said examples in which retailers agreed not to pass on price falls would be in breach of law.

“The ACCC has observed that retail petrol prices in Melbourne are influenced by a weekly price cycle, which does not occur in smaller regional markets,” the spokesperson said, noting the regular price cycle rises had not occurred in Melbourne since 19 May.