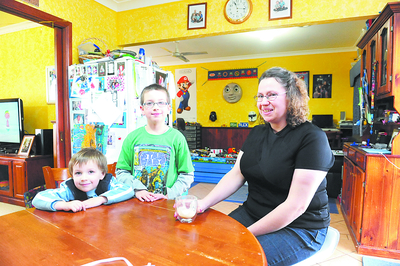 NEWBOROUGH’S Adele Pugsley is Latrobe Valley’s average resident – and she does not mind being average at all.

Reflective of preliminary Census 2011 data, Australian-born Mrs Pugsley has been married for 10 years, has two children, and will turn 39 on her next birthday.

“Most of my friends are stereotypical and fit the profile as well, as do the mums at school.”

Census 2011 data showed the median age for residents in the Latrobe Local Government Area was 39 years, there were more women than men, and the majority of residents were married and had two children.

Nearly 81 per cent of Latrobe Valley residents are born in Australia, and 67 per cent of residents’ parents were also Australian-born.

Born in Darwin, both of Mrs Pugsley’s parents were also Gippslanders, as were her grandparents.

“We moved back here (Gippsland) after Cyclyone Tracy; my grandparents insisted we move back, and we did,” Mrs Pugsley said.

“I have been in Victoria most of my life, and have lived in the Valley for 20 years.”

Mum of sons Alex, aged eight, and Ashley, aged four, Mrs Pugsley said she moved to the Valley for work; at the time, she secured an apprenticeship with the then State Electricity Commission of Victoria as a fitter and turner.

After its privatisation she found employment with the railways, and has been a station officer at Moe for 13 years.

When asked how she has seen changes in the Valley over the years, Mrs Pugsley said she had seen many people leave, but many people return, especially for their families.

“I’ve also seen how the Valley has become more cohesive; there’s better community spirit now, and that’s been the biggest change,” she said.

“We have a bad reputation with the Melbourne papers, who look down on us, but then you are seeing more people moving out this way because of housing affordability.

“People in Melbourne can spend up to two hours in traffic; from out here it’s more commutable.”

“We have the best parks out here,” she said.

“I wouldn’t live anywhere else, especially with young children.”

“In my job I see people taking the train to Melbourne for their regular checks; when you’re ill, two hours is a hard distance to travel,” she said.