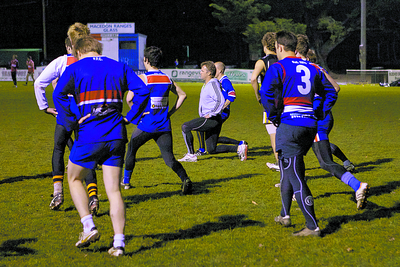 Former North Melbourne star Glen Archer, who was known for his toughness on the field, will be hosting a conditioning clinic with the Morwell East Football Club on Tuesday.

The award began as an award for AFL clubs, but two years ago it was adopted by the VCFL and according to Archer, it has been a great success.

“The program focuses on the values of the army, being leadership, teamwork and courage,” he said.

“All those things are applicable in football, and its great to get out to clubs at a grass roots level and help them work on these principles.”

At the end of the season, the club with the most umpire nominations wins the award and the chance for 10 club players to attend an army reserve weekend in Canberra.

Next Tuesday night Archer, along with defence force physical training instructor Wayne Morley, will run the players through a “very tough” hour-long conditioning session followed by a chat with the players.

“After that we usually leave it up to the coaches as to what they want to do, but we try and go through some one-on-one with certain players,” Archer said.

Archer reinforced the importance of physical conditioning in the modern game, highlighting the demands placed on players’ bodies due to the game’s pace.

“The game is so much quicker now and the training from when I started is completely different” he said.

“We used to focus on long, plodding runs but now it’s all around ball work and short sharp bursts that have to also be sustained for long periods of time.”

If he was a “young guy”, Archer said he would definitely consider a career in the defence forces, and the group will be addressed by a squadron leader from defence recruitment.

“People think if you go into the army you’re going to end up fighting in a war somewhere, but that’s not the case at all,” he said.

“There are so many aspects to the army, you can go in and become a plumber or whatever you want, and you don’t have a massive HECS debt at the end of it.”

Community members can watch the session, but cannot participate.

The session will be held on Tuesday, 10 July at Ronald Reserve, Vary Street, Morwell, beginning at 6pm.