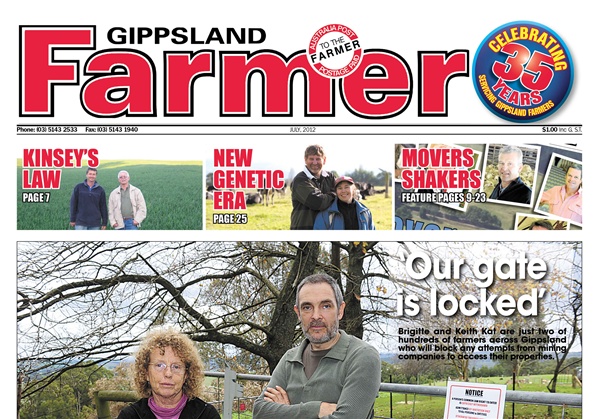 A groundswell of landholder rights activism has exploded across South Gippsland, in the face of possible mining operations encroaching on local farmland.

After months of gradually building momentum, landholders of all political persuasions have turned out in droves to recent mining information meetings, with some events attracting up to 200-strong crowds.

This comes as the infamous Lock the Gate alliance started up a Gippsland branch last month, which has already attracted about 700 registrations, through direct applications and affiliated community group members, who are pledging to deny access by mining companies to their properties.

With reports of exploratory drilling occurring on farmland across south and central Gippsland, the groundswell of concern spurs from potential environmental damage from coal seam gas operations.

While most of Gippsland has been subject to mining exploration licences by various companies for many years, farmers have collectively agreed they can no longer afford to turn a blind eye to potential mining operations.

This comes as the South Gippsland Shire passed a motion calling for a moratorium on coal seam gas operations in Victoria late last month, mirroring a similar motion made by Bass Coast Shire in April.

The moratoriums, forms of which have been called on by a further three councils state-wide, demand the State Government put a hold on various forms of new mining activity, particularly coal seam gas operations, until their impact on farmland and water aquifers are fully known.

While Lock the Gate Gippsland founder Kelly Van Den Berg commended the support from the South Gippsland Shire, she said local governments only had so much power in influencing the State Government’s “open endorsement” of mining expansion, and it was integral for landholders to continue having their voices loudly heard.

“This is really out of (local governments’) hands to a certain extent; they can make recommendations and pass motions on behalf of us, but their influence is absolutely not enough,” Ms Van Den Berg said.

“Once (mining companies) are on your land, there’s nothing you can do about it; we’ve know of so many examples (in northern New South Wales) of how people were unaware, happily working with mining companies who they trusted on their word, and before they knew it, things quickly went bad.”

In a press release last month, Deputy Premier and Member for South Gippsland Peter Ryan moved to allay landholders’ concerns, stating he “would not allow planned on shore drilling for coal seam gas to damage the Gippsland’s water tables”.

“The planned drilling (announced recently by ExxonMobil) will entail five to seven exploratory wells drilled over the next 18 months.

That is the extent of it,” Mr Ryan said.

He said the planned drilling would not involve ‘fraccing’, the technique of blasting chemical-laced water mixed into well holes to break open coal seams for gas extraction.

For Friends of the Earth’s Cam Walker, a longtime activist against mining operations among farmland, the amount of community concern was “absolutely snowballing”.

“I haven’t seen anything like this in 20 years of activism; and a lot of these landholders are rusted-on National (Party) voters who are really upset,” Mr Walker said.

“Until now we’ve mostly seen small operators in this industry; this deal marks the introduction for the big players; this just makes the likelihood of CSG getting a toe-hold in Gippsland much more likely,” he said.