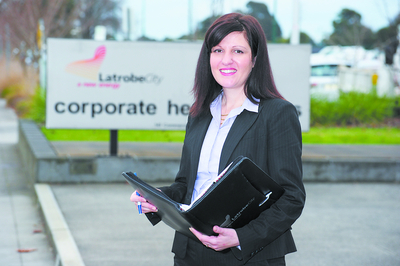 A PASSION to assist Latrobe City in its transition to a low-carbon future has secured Traralgon’s Julia Agostino a seat on a national trust.

Ms Agostino will be one of 22 Victorians to travel overseas, in a bid to strengthen their skills and expertise, then introduce the knowledge obtained back into their community.

This is an initiative of the Churchill Fellowship, a Winston Churchill Memorial Trust, and Ms Agostino, Latrobe City manager regional partnerships, will be one of the 115 Australians to pursue initiatives and research projects internationally.

“I was a little bit stunned and almost didn’t believe it; it took a few days to sink in,’ Ms Agostino said, on hearing of her success.

“It’s quite humbling really, considering about 1200 people apply for this fellowship.”

Ms Agostino, a former Federal Government employee, described Latrobe City council as “a proactive council… who really are leading the way and putting their money where their mouth is”.

She said her role as manager regional partnerships and broad expertise in the field, would enable her to assess other local governments’ transition policies, as part of the Churchill Fellowship.

“I’m going to play it by ear; I’m not looking for a silver bullet or anything,” she said.

“But I want to get a good sense of the strategies they use to get key agencies and the community involved.

“I’m going to be looking for common threads.”

She said her trip overseas was “timely” as she hoped to bring in some solid analysis for Latrobe City’s review of its transition policy in the next 12 to 18 months.

According to Ms Agostino, Latrobe City has the advantage of “great community spirit” and “good lifestyle”, adding it was well positioned for the future.

With an awards ceremony lined up later this month, Ms Agostino said she had the backing of council and her family, adding her mother, a woman who rarely travels by air, was keen to fly down from Canberra for her daughter’s ceremony.

“It’s come in a good point in my career; I’ve been doing this work long enough to know what questions to ask,” Ms Agostino said.

“My family are very supportive and (the Winston Churchill Memorial Trust) also encourage you to bring your partner along for the trip.

“I couldn’t have hoped for a better response.”