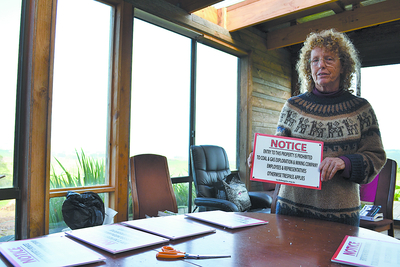 CONCERNED Mirboo North and Callignee residents are feeling the pressure to protect their towns from being “annihilated” after two separate notices of applications for exploration licences were given by the same mining company.

Residents of Mirboo North and district will meet on Sunday to plan its next move, while it is believed Callignee residents would rally to do the same.

Mantle Mining Corporation’s applications for the two new tenements were announced to the Australian Stock Exchange in late June this year, but news has only just begun to trickle into the respective communities.

Speaking to The Express in her home on the outskirts of town, alpaca farmer and concerned Mirboo North resident Brigitte Kat said it was important to get the community together to protest the possibility of having their town “annihilated”.

“It will mean collapse to our land values and a serious threat to our health; we don’t need more coal,” Ms Kat said.

“Where can we go, with no more money to buy another home?

“Those worst hit will be on the perimeter of the (proposed tenement area); you’d be right next to it and have an appalling view.”

Ms Kat, who has been vocal about potential coal seam gas exploration in the region through her involvement in the Lock the Gate Gippsland alliance, said the news was “a further kick in the guts”.

Ms Kat was preparing “thousands” of Lock the Gate signs, which she said would be sold at Sunday’s 11am meeting at the Mirboo North Football Club rooms, as well as stickers.

She said letters to Deputy Premier and Member for Gippsland South Peter Ryan, as well as the Department of Primary Industries, would also be made available for the public to sign.

“We want everyone to have the sign on their gates, to have the chance to keep coal and gas companies out,” Ms Kat said.

Residents of the South Gippsland town have been described as shocked by the news about Mantle Mining’s proposal, amplified by outrage over proposals for coal seam gas exploration in the region.

Fellow resident and local business owner Kelly Schilke, who had the anti-exploration sticker displayed on the front of the business, said she was “alarmed” by the lack of transparency of the unfolding events.

“I have issues putting profits before people,” Mrs Schilke said.

“I can’t see any benefit in it; people would be naive to think this will bring jobs, because they want to get the experienced people to do it and won’t have time to train the kids down the street.”

Meanwhile, South Gippsland Shire councillor Kieran Kennedy said he would be attending the meeting on Sunday.

“This would be devastating to them; Mirboo North is a very community-minded and committed town, and to have an open-cut (coal mine) on their doorstep would have enormous repercussions,” Cr Kennedy said.

“Nothing is worth the disenfranchising of the community; we will wait and see what the proposal is and wait to get more direction from the community.”

Latrobe City mayor and Gunyah ward councillor Ed Vermeulen said the advertisement in Monday’s Express about Mantle Mining’s interest in Callignee was the first he had heard of it.

“I urge the community to hold a public meeting to draw attention to the issue,” Cr Vermeulen said.

“I am prepared to come along and express reservations of the exploration of the area; local people should be very careful of the issue.”

Cr Vermeulen said he hoped a representative from Mantle Mining could come forward to provide an explanations.

Any person may object to a licence being granted within 21 days after the latest date on which the application was advertised.

Mantle Mining was not available for comment at time of going to print.