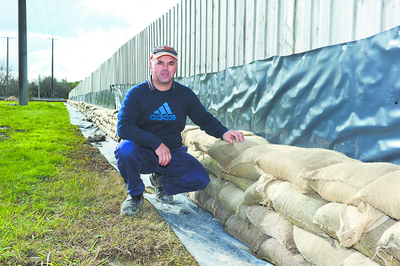 Latrobe City Council will investigate preventable flood measures, after many homes were repeatedly inundated with water during the June floods.

Cobon Court, Morwell resident Dion Tanti has welcomed the news, after he experienced more than $10,000 worth of flood damage to his home during the floods.

“What council keep telling us is all about the cost (of works that are needed),” Mr Tanti said.

“Every insurance company has this area (designated) as flood-zone and council are the only people that don’t believe that.

“We have been flooded three times in one month; how can you tell us this is not a problem?”

He said council engineers admitted to approving the inadequate storm-water drains in the court, and were taking “little steps” to mitigate the situation.

“They are not coming out and saying, ‘this is our fault’, but by the way they word it they are taking responsibility,” Mr Tanti said.

According to Mr Tanti, the court residents had become “paranoid”, as they wait for the floods to “hit again”.

Last month, council installed sand bags to prevent a reoccurrence of floodwater entering properties in estates in Traralgon and Morwell, which Latrobe City councillor Graeme Middlemiss said were works council had not budgeted for.

“We are being caught out; we need to have a policy in place to avoid unnecessary cost to residents and council,” Cr Middlemiss said.

Council officers will prepare a report which would include options to prevent incidents occurring when residential zoning and development plans are approved in the future.

The issue was raised at a council meeting in May, with residents from Moe and Traralgon complaining of damage to properties and increases to home insurance as a result of an inadequate drainage system.

“There are reasons for some of these issues and some are worrying but we are giving it attention,” Cr Vermeulen said.

Despite council not budgeting for flood damage maintenance, Cr Vermeulen said there was “some flexibility” with funding temporary or permanent works.

However, councillor Sharon Gibson questioned whether council could afford the extensive remedial works required in all Latrobe Valley major towns.

“If that is the case, will all the flooding mitigation issues be addressed this financial year or now?” Cr Gibson said.