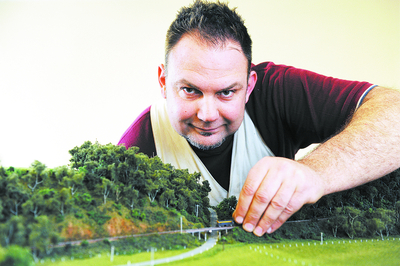 LOOKING at Paul Blake’s model trains, trees and bridges, it is hard to think of them as anything but works of art.

“You can paint the scene with the bridge and the trains and everything, but to recreate it as a model, it’s like creating a three-dimensional artwork,” Mr Blake, of Glengarry, said.

Using a scale of 1:500, meaning the model is 500 times smaller than what it represents, Mr Blake is in the process of building from scratch, the train line at Orbost and its surrounds.

And the detail is awe-inspiring – using photographs taken of the area in 1981, Mr Blake has been able to place every bush, tree and piece of track exactly as it was and has even put an engine in the train.

“In the train modelling world I’d be called a ‘rivet counter’; I don’t count rivets, but I do chase as much detail as I can.”

Over the past 12 months, Mr Blake said he and his “patient” partner Renee have made numerous trips to Orbost to gather details, such as the number of trestle peers supporting the bridge, and even samples of dirt and rock. “I scooped up some of the dirt near the railway line in Orbost and put a very fine layer over the base to give it the correct tone,” Ms Blake said.

“Even the ballast (crushed rock the railway track is laid on) came from a local quarry in East Gippsland because the colour is quite unique to the area.”

While Mr Blake’s models primarily centre around trains, his interest in microscopic modelling stems from a general appreciation of creativity.

According to Mr Blake, he has been interested in art since he was a child, often staying inside at lunch time “to just draw”.

“I’m really interested in anything where people have put in some time and there’s innovative thought behind it,” he said. “I love seeing other people’s work because it inspires me with what I do and it gives me something to aspire to.”

However it was during high school that he abandoned two-dimensional works for modelling, using a plastic takeaway food box for his first creation.

This is the first time Mr Blake has attempted something this big using such a small scale, and said while many people were “daunted” by it, to him, it was “absolutely fascinating”.

“I love the challenge of the detail,” he said.

“So many times I’ve thought ‘no, I can’t do that, it’s too small’ and I’ve written it off in my mind, but then I’ve gone back to it and surprised myself, so my advice is to never write anything off in your mind; just have a go.”

Mr Blake estimated the layout would be complete in six to eight months and will be displayed around Victoria and Australia.

He hopes to create the railway line “all the way back to Bairnsdale” .