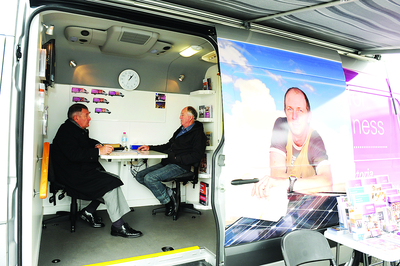 DESPITE operating a pharmacy in Churchill for 37 years, Churchill entrepreneur Ross Ollquist said keeping up in a fast-paced business world was a challenge.

Partway through a capital-raising effort to establish a community bank in Churchill, Mr Ollquist dropped in on the State Government’s latest effort to assist current and aspiring business owners, the Small Business Mentoring Service mobile van.

“Going in blind is a recipe to fail these days; even with my experience, there have been vital things that have popped out on the business landscape in the last few years that I didn’t know about,” Mr Ollquist said, after visiting the SBMS van at Latrobe City headquarters last week.

Manned by a squad of business mentors, with decades of collective experience under their belts, the SBMS van, an extension of the 25 year-old service, now provides subsidised assistance to small businesses in a newly announced partnership with the State Government.

Working in the context of a 70 per cent failure rate of small business start-ups within two years, SBMS chief executive David Gregory said it was integral business owners spend 15 per cent of their time planning.

“One client not so long ago had mortgaged their house and had convinced their wife to leave her business, but it was clearly doomed to fail, and they clearly had not done their research,” Mr Gregory said.

SBMS mentor Rene Blaszak said after having visited a number of regional areas, he noticed a “clear passion” and commitment among aspiring businessmen, but many of the basics, such as market research and time management were often over-looked.

“One person today was going to hold their nose and jump in, but after talking with us, it became clear that they needed a lot more research,” Mr Blaszak said on Thursday.

“Another client not so long ago had mortgaged their house and had convinced their wife to leave her job, but it was clearly doomed to fail, and they simply had not done their research,” Mr Gregory said.

State Member for Morwell Russell Northe said with a climate of uncertainty in the Latrobe Valley, small businesses had no choice but to equip themselves to evolve with the times.

“If you stand still, you will get caught up where you are, and you will be vulnerable – every business needs to re-establish (itself) for contemporary times,” Mr Northe said.

Despite years of personal experience, Mr Ollquist said he was “impressed” with the range of information the SBMS had on offer, and had booked in for an appointment.

“Getting a business going is certainly harder these days; with more red tape than there used to be … the frontier is always changing,” Mr Ollquist said, reflecting on how things had changed since starting up his pharmacy, from which he retired in 2002.

“I went in totally undercapitalised, so it really took until 1974 or 75 for the business to take off when community health and doctors came into town; that was seven or eight years of nothingness before it did well, but that approach is not possible these days.”