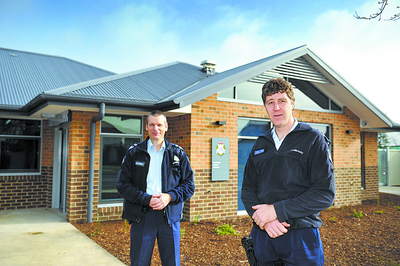 The four-officer station on Contingent Street, which was opened by State Member for Narracan Gary Blackwood, is a significant step up from the previous 1960s-era brick building.

The station was originally opened in 1914 as a weather board home, demolished and replaced in 1960 for a one-manned officer brick station.

“The old one was dated and getting too small and crowded for the staffing levels, and the facilities for the public were not ideal,” Ldg Snr Con Ferguson said.

“Now if we have any offenders that aren’t cooperative or more than one offender, we have somewhere to keep them while they are processed.

“Previously we took anyone that was playing up to Warragul or Moe.”

He said the natural light and a working heating and cooling system were a new perk in the station.

The new 16-hour station aims to improve resources in order to better police the area and incorporates sustainable features, including solar energy system, and rain-water tanks.

“The old one was just too small; maintenance was becoming an issue and there wasn’t enough space for computers, desks, storage of property and equipment,” Ldg Snr Con Ferguson said.

More than two years in the pipeline, he said the station would benefit the community because it was more “pleasant”.

“Our last counter was one metre wide; this counter is about six metres long,” he said.

“Now the public can discuss matters in private, where they can come and talk with us.”

The new Trafalgar Police Station is part of the State Government election commitment to invest more than $56.4 million in new and upgraded police stations and recruit 1700 extra frontline police officers by November 2014.