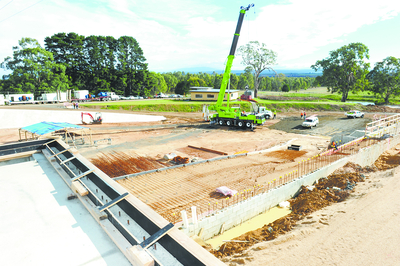 THE state and federal governments’ attempts to facilitate construction of new clean coal demonstration plants in the Latrobe Valley have been labelled a “misplaced obsession” by the Gippsland Trades and Labour Council.

In response to the joint-government $90 million Advanced Lignite Demonstration Program announced last week, GTLC secretary John Parker said the Valley should not get too excited about the program, based on the private sector’s handling of the resource so far.

“The private sector hasn’t delivered anything to advance our future use of the (brown coal) sector over the last 15 years (since privatisation)… the problem is this funding will only deliver, at best, an experimental plant; it won’t deliver a new power station, which is going to cost anywhere between $3 billion to $4 billion,” Mr Parker said.

The ALDP is seeking proposals from “interested parties” wanting to develop up to four pre-commercial demonstration scale projects in the Valley from as early as next year, which aim to prove the commercial viability of clean coal technologies such a de watering, liquefaction and gasification processes.

“We are talking about processing a product like coal on massive scale that is not being done well anywhere in the world,” Mr Rawson said, welcoming the ALDP announcement.

“It won’t be a tax or change in consumer sentiment which will drive the development of clean coal technologies; it will be the direct funding of companies like us doing the hard yards to develop the methods which will get the ball rolling.”

The Express reported in December the Latrobe Resources briquette demonstration plant was already under construction, for which the project manager Paul Lingard said trials would begin in early 2012.

By April this year, visible construction activity onsite had slowed, fuelling rumours among the local industry the project was struggling to attract investment.

However Mr Rawson dismissed the rumours, and said the drawn-out construction was due to an up-scaling of the initial operating capacity of its demonstration plant.

“We are an internally funded project… the project changed quite substantially when we decided to build up from the initial small scale, from a perfectly capable demonstration plant to a larger full scale commercial plant,” Mr Rawson said.

“That decision to make the expansion has from day one raised a whole heap of issues; the up-scaling of the plant meant we had to reorder up-scaled equipment.”

Clean coal technology developer Exergen, which has been proactively lobbying government to open up access to the brown coal resource for its coal liquefaction technology, said the ADLP funding was a milestone in the process of securing private investment.

“The ALDP gives our shareholders much more confidence there is the right support (from government) to develop something in the Valley; as a direct result of the announcement we have had a lot more positive discussion from our shareholders,” Exergen chief executive Trevor Bourne said.

Mr Bourne said it was unclear whether the ALDP pre-criteria included an allocation to the resource by the State Government or existing licence holder.