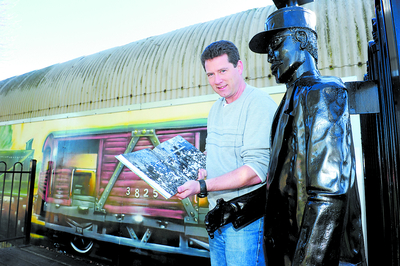 GROWING up in a family of railway workers Nick Anchen has a passion for trains chugging through his veins.

The Ferntree Gully resident, who has worked as a train driver on the Metro lines for more than a decade, recently released a book on the iconic narrow gauge railways, which include the “youngest” of the four tracks found in Victoria, from Moe to Walhalla.

Titled “The Narrow Gauge”, half of the 2000 printed copies of the book have already been sold, according to Mr Anchen, who has previously published several titles on Victoria’s historic railway lines.

“It’s not just about trains; it’s a social history with real-life accounts and characters who worked on the railways,” Mr Anchen said.

“Railways were such a big thing; they used to employ thousands and was just part of life…things are a bit different now.”

Mr Anchen’s own great -grandfather was a career station master, who worked at Moe and Walhalla in their heyday.

His interest in narrow gauge railways, which has a track gauge of about two feet six inches, compared to the standard or broad gauge at 5’3″, was sparked after a stint as a volunteer fireman or coal shoveller at the Puffing Billy railway in his teens.

“I remember my grandmother, who came from a railway family herself, telling me yarns about the railways,” he said.

“In the 1950s, when the lines were to be closed, it was a remarkable story of how a group of people tried to save the line…I’ve been fascinated by what they did.”

The Moe-Walhalla line, which is the newest of Victoria’s four narrow gauge railways, was completed in 1910 after six years’ construction, which Mr Anchen said was a “long time” even for back then, because it navigated rugged terrain.

“The town of Walhalla was fabulously wealthy, almost a ‘Wild West’ kind of town, and they were trying to get a railway for a long time…the government kept turning them down because it was so expensive,” he said.

“When they eventually finished (building the railway), boom times were over, and the main gold mine was closed…it was the time of World War I and it also became more expensive to extract gold.

“Basically, the railway arrived in time to take the town away…there are houses which were taken apart and brought down from Walhalla; you could buy them for ?10.”

Mr Anchen said his great-grandfather, Ernest Lancaster, would have likely overseen one of the busiest times for Walhalla’s railway “for the wrong reasons”.

Mr Anchen, who is also a photographer and avid historian, said it was important to preserve pictures and stories of Australia’s early days.

“I want to keep history alive,” he said.

“It is important to preserve what we can.”

When asked about the role of railways in today’s society, Mr Anchen said while passenger trains had seen something of a revival, prospects did not appear as bright for freight trains.

“It’s a great shame; it could be better utilised,” he said.

“While passenger numbers may have grown, infrastructure spending has not kept up with it.”

Mr Anchen’s upcoming publications include the second volume of mini-biographies of train drivers, and a coffee-table book of a collection of colour photographs of Australia in the 1950s.

“Black and white photographs are good, but colour photographs just bring things to life,” he said.

The book The Narrow Gauge is available at Old Gippstown and at the Moe Newsagency, and other bookstores in the Latrobe Valley in the coming months.

For more information on the book, visit www.sierraaustralia.com/the-narrow-gauge.html