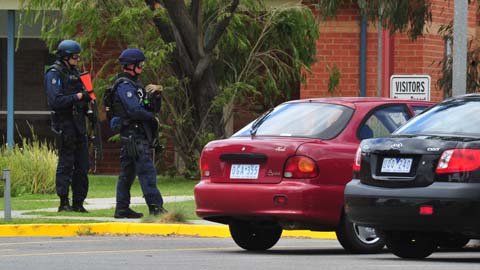 A MELBOURNE based critical response team was called to assist police in a six-hour stand off at a Traralgon mental health centre yesterday, after a resident began damaging his unit.

Traralgon police were called to the Latrobe Valley Community Mental Health centre at 7am, after a male resident failed to cease aggressive behaviour at the request of care workers.

Traralgon police Sergeant Danny Hower said due to the resident’s “extensive history of violent and aggressive behaviour”, the critical response team was called in from Melbourne to negotiate.

“After a couple of hours of negotiation, the man complied with police requests and was taken into custody; we basically took a safety first approach, and had him contained until (the response team) arrived.”

Sgt Hower said the stand off was successfully resolved, after hours of negotiation, after 1pm, when the resident received medical treatment at Latrobe Regional Hospital.

He said no criminal offence had been committed, adding it was a mental health issue which required “response discretion”.