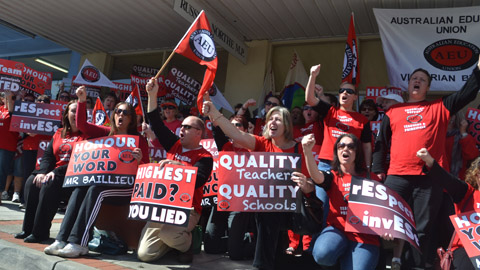 THE next month will be “critical” in ongoing negotiations between the State Government and the Australian Education Union as it will determine whether the 12-month battle for better pay and conditions will continue into the year ahead.

Speaking at the Traralgon Australian Education Union rally on Tuesday morning, AEU Victoria president Mary Bluett said the parties had reached an impasse on key areas of salaries and the high level of contract employees, which bred concerns of job insecurity.

“These matters are all negotiable, but what’s not negotiable is we have got to have movement on these (discussions),” Ms Bluett said. At the rally 150 teachers and support staff dressed in red gathered outside the office of State Teaching Profession Minister Peter Hall in Traralgon, which was part of statewide half-day industrial action by education staff.

Meanwhile, at a rally outside State Member for Morwell Russell Northe’s office, 70 educators gathered from across the Valley and West Gippsland.

Police were present at both rallies, which had members redirecting traffic from the temporarily closed-off streets.

“Teachers deserve for this to be resolved as soon as possible, so we can get on with what we want to do, which is being there for the kids,” Ms Bluett said.

“We are here to send a strong message that his constituents are very angry and disappointed they have to continue to take action rather than have negotiated an outcome, which is what was expected by this stage.”

Ms Bluett said talks had broken down over issues of pay, where the AEU had rejected the government’s 2.5 per cent pay rise proposal, and the job insecurity bred by high contract unemployment, which saw up to 20 per cent of teachers and 45 per cent of support staff without secure employment.

“With the creation of (Mr Hall’s portfolio), that was the signal from the State Government they would treat teachers with the respect they deserve,” she said. Another concern union leaders and teachers have is that higher salaries in other states, especially Western Australia and New South Wales, had become more attractive to younger teachers. At the Morwell rally, Newborough Primary School principal Tim Delany said three of his school’s teachers were searching for employment in WA.

When phoned, Mr Northe said the rallies had been held in a cordial fashion and the teachers’ points had been made.

“As a local MP, we take the information and views to our respective political parties, but this is a matter for the union and the government to work through the enterprise bargaining agreement negotiations,” Mr Northe said.

“We hope they’re concluded in the very near future before it becomes an impediment to students and parents.”

At the time of going to press, Mr Hall’s office had not responded to a request for comment.