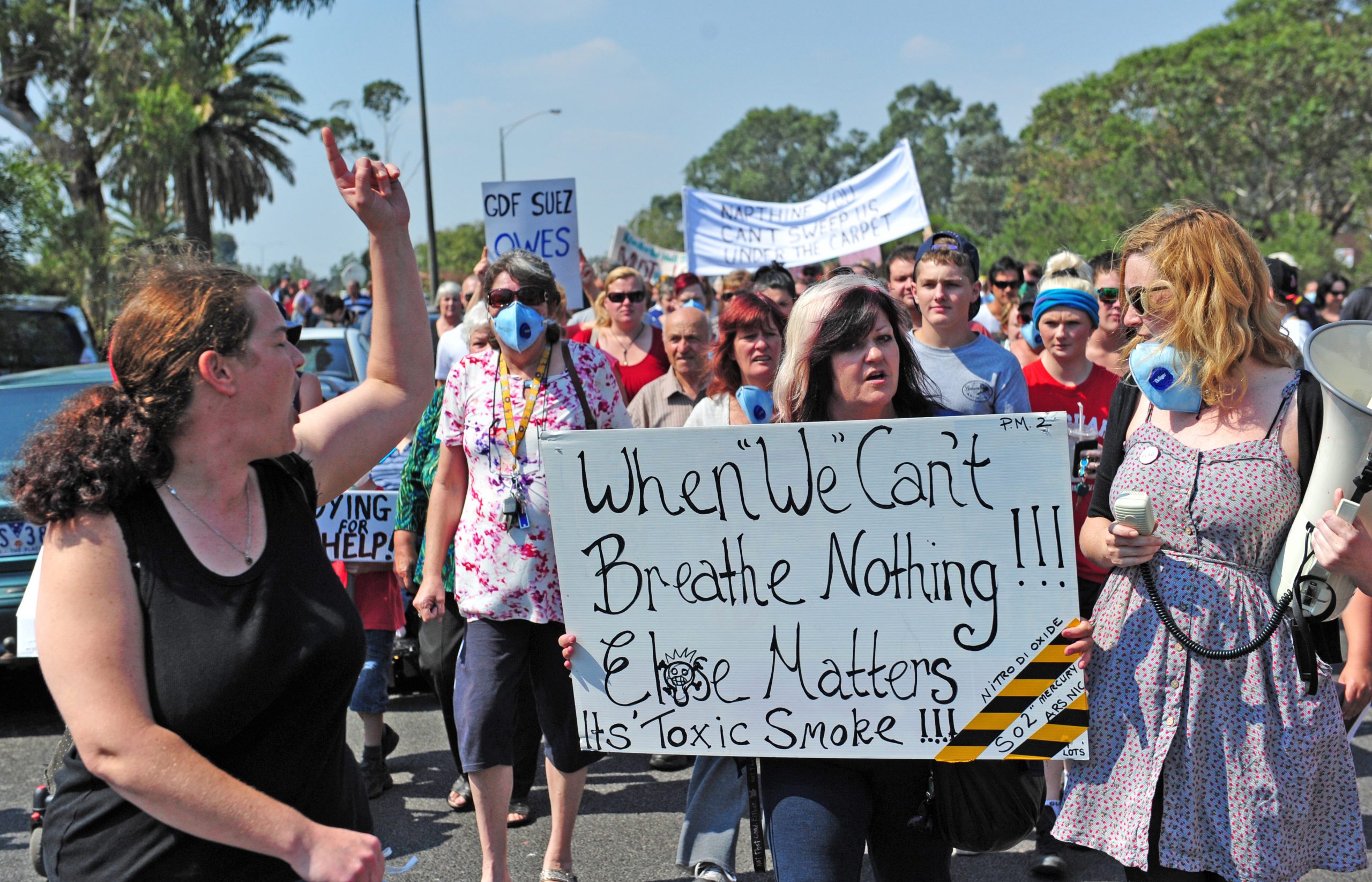 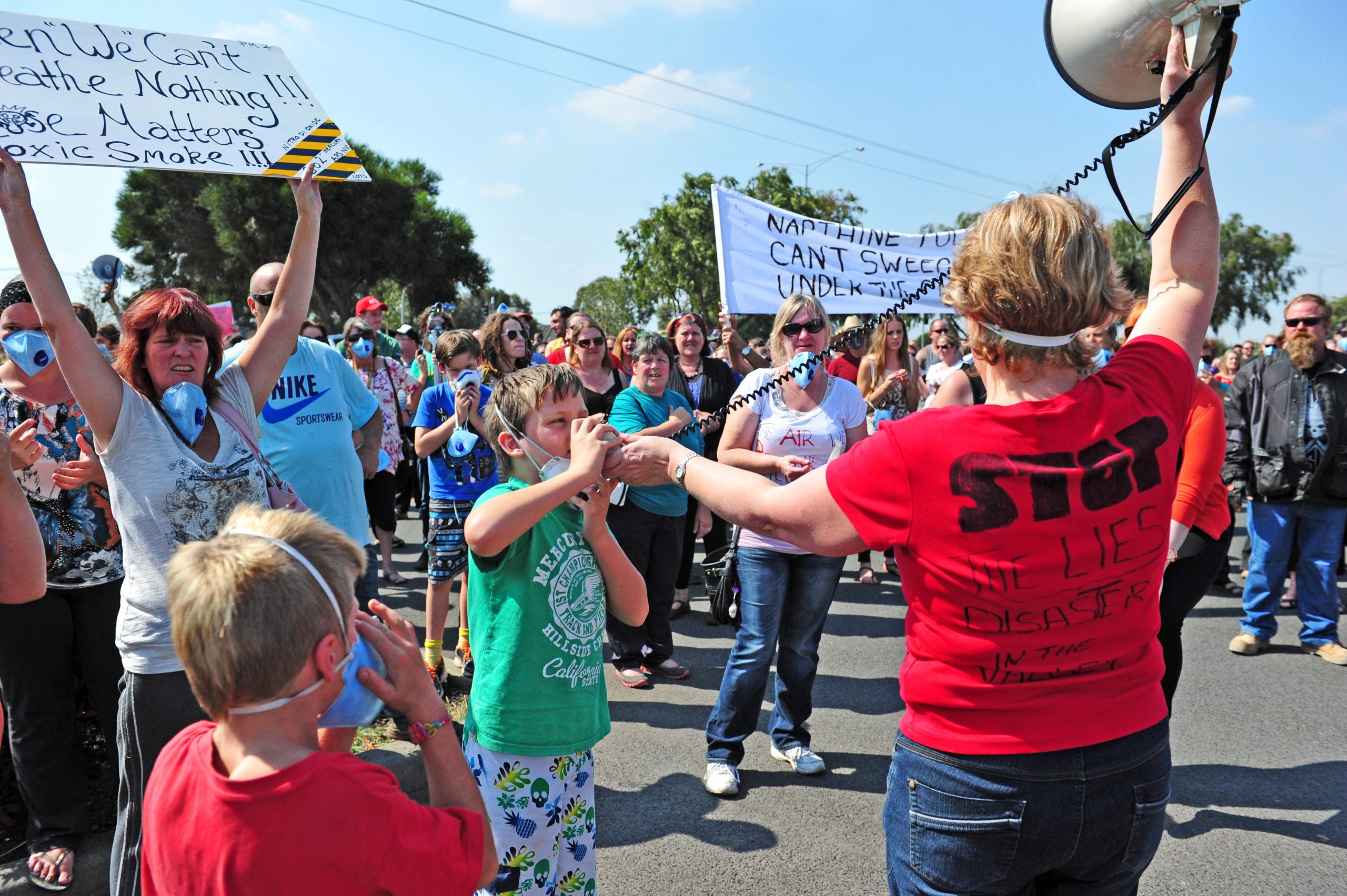 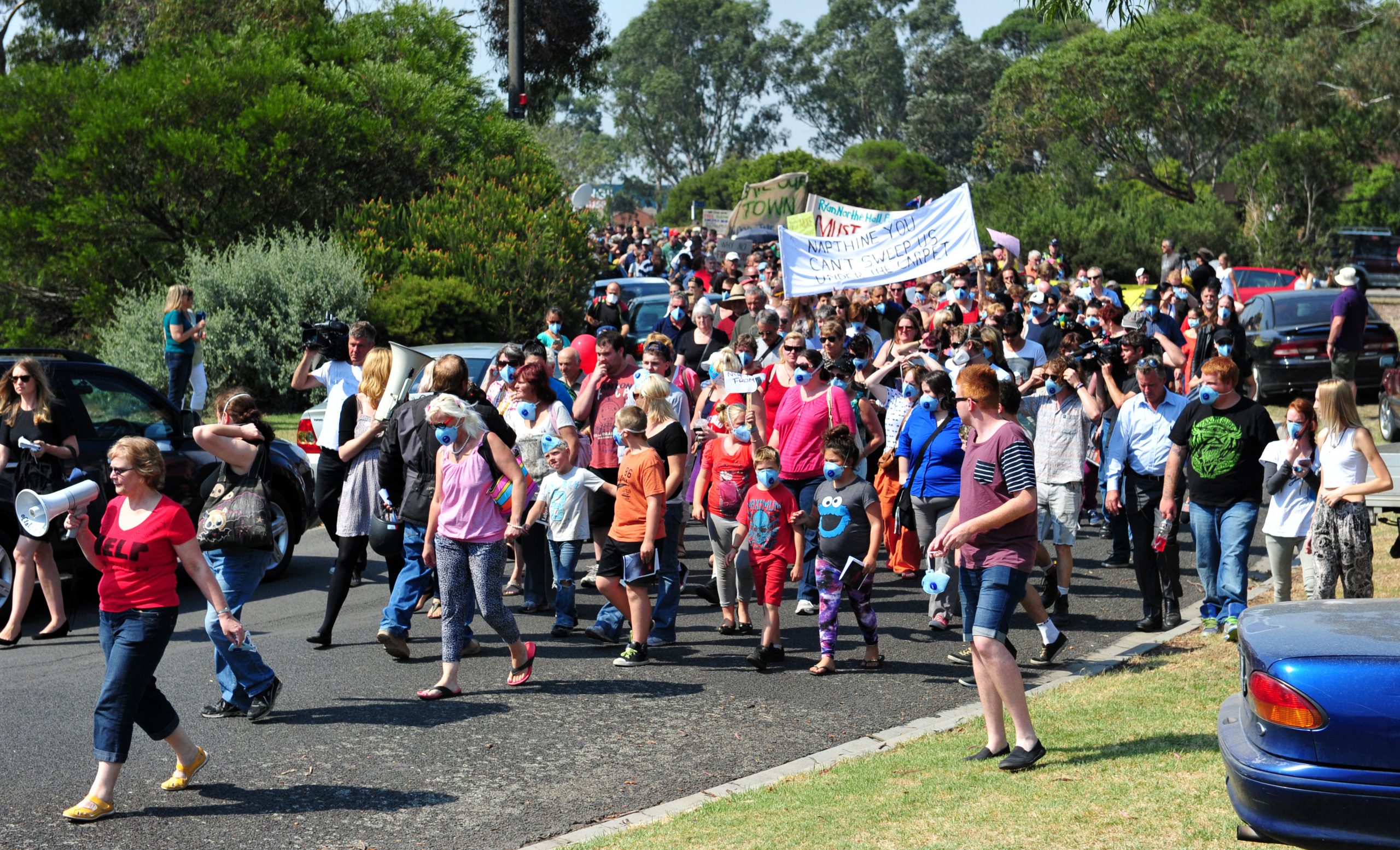 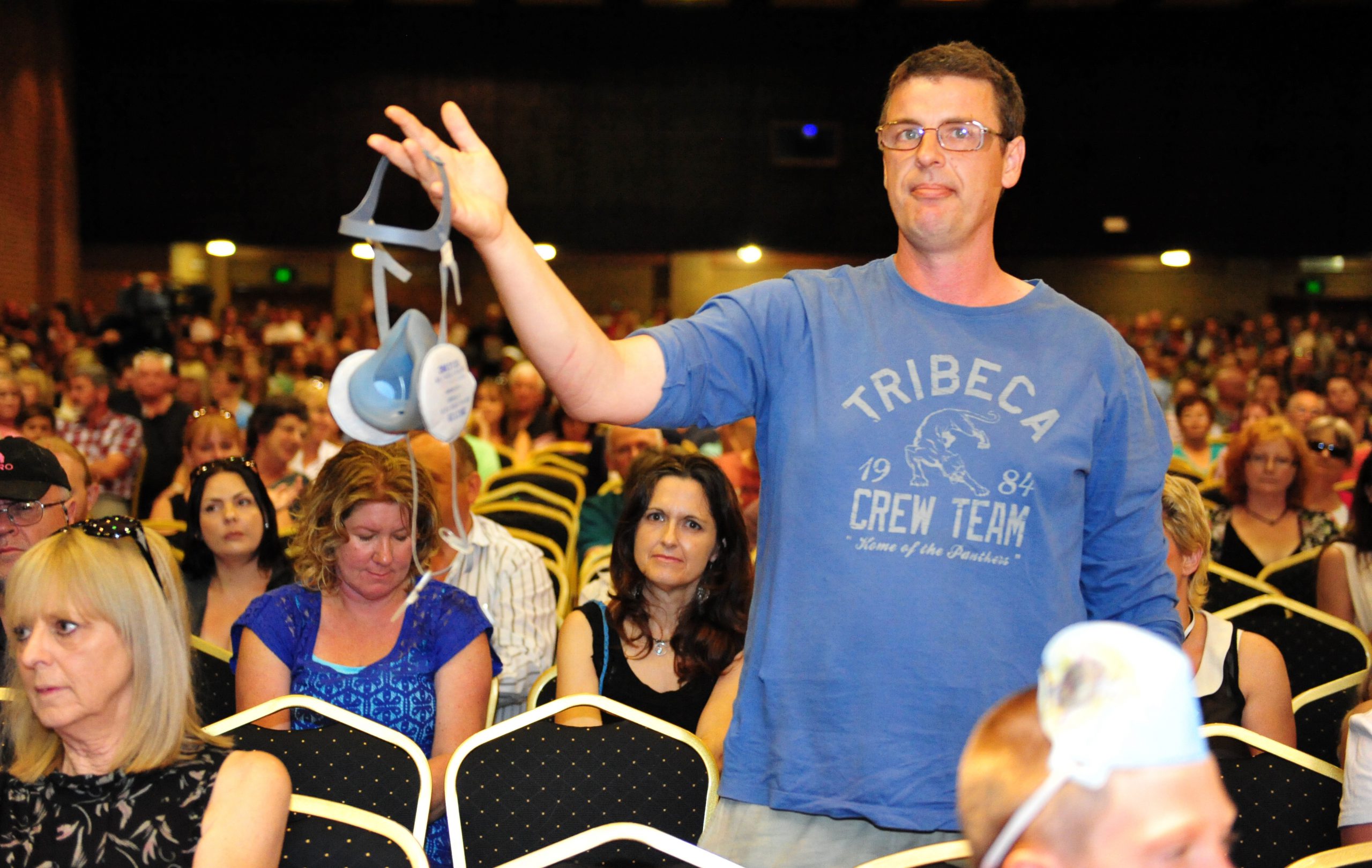 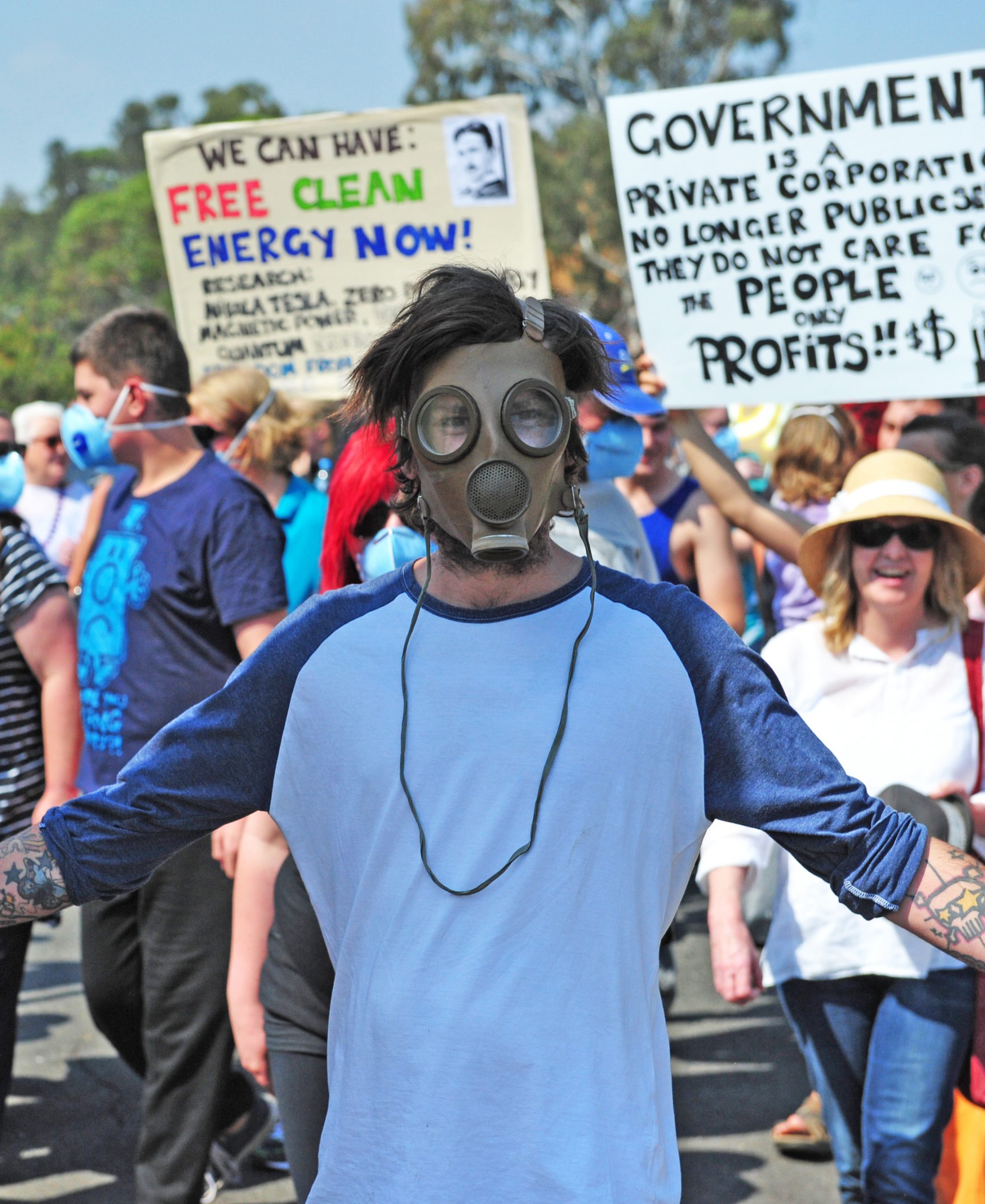 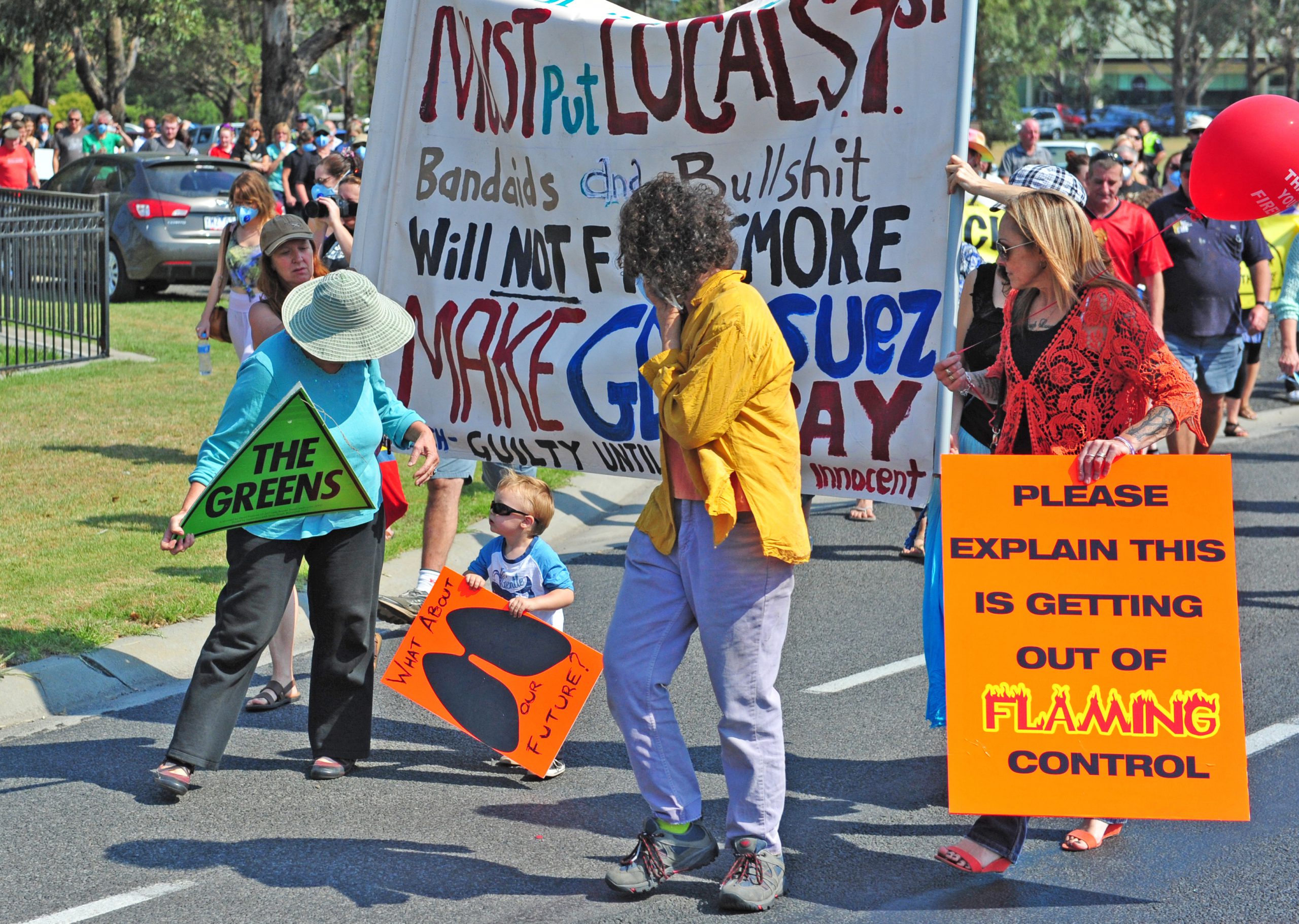 “This town is toxic.”

The analysis of local David Savige was shared vehemently by hundreds of disgruntled Latrobe Valley protestors who crammed into Morwell’s Kernot Hall yesterday.

Masses were demanding immediate action, transparency and accountability from government authorities and GDF SUEZ over the ongoing Hazelwood open cut mine fire.

The ‘Disaster in the Valley – Dying for Help’ demonstration had about 1200 face-mask clad protestors march from Immigration Park to Mid Valley Shopping Centre, united in their call for a royal commission to investigate the health crisis enveloping the town.

Championing the cause was Greens Senator Richard Di Natale, who spoke to the congregation in support of a judicial inquiry into the mine fire.

Animosity was rife at GDF SUEZ amid allegations it failed to rehabilitate worked out mine areas, which are still burning since the initial 9 February blaze.

Doctors for the Environment Australia speaker Dr Merryn Redenbach pointed to the damage caused by industry bottom line thinking in her push for adopting renewable resources.

“While government and companies that profit may consider coal electricity a cheap form of electricity, that is because full costs of the industry are not taken into account, and by that I mean local health impacts and impacts in terms of environmental degradation,” she said.

Dr Redenbach lamented a lack of “research certainty” regarding the health effects of current exposure to smoke and harmful PM2.5 particulates, but said it was no excuse for a lack of State Government intervention.

“Because we don’t have standard on this, the EPA and other regulation authorities have not been required to measure and record the concentrations. We think that is completely unacceptable,” she said.

Dr Redenbach said asthma and chronic bronchitis were more prevalent in areas where coal fires had burnt for an extended period, and the risks did not stop there.

With conflicting information being provided to local residents, and recent calls from Chief Health Officer Rosemary Lester for “at risk” residents with pre-existing conditions to leave town, one woman spoke up about her own health advice.

She said despite having only 28 per cent lung function, living with oxygen support and awaiting a double lung transplant, she was advised by her doctor not to seek refuge elsewhere.

Those mixed messages were addressed by protest organisers, who quoted section six of the Public Health and Wellbeing Act of 2008 as part of calls for urgent aid from authorities they deemed had failed in their duty of care.

“We can act together, we can force government to declare this a national disaster, the health act says so.”

Morwell school teacher Erin Gruis shared her story, detailing how her family of six, including two asthmatic children, had been forced to sleep on the floor of relatives’ homes as they did not qualify for aid to evacuate.

“We have received no support from the government or anyone else to assist in our current situation. We have spent everything we have to protect our children’s health,” she said.

Ms Gruis called for stronger advocacy for Morwell, and said the responsibility to protect children from the smoke risk should not fall to families alone.

“There is a health problem, but this is not a state of emergency? Where are our advocates? Who is speaking on behalf of the families in Morwell?”

Her sentiments resonated with mother of four Kristy Passey, who feared for her children’s futures.

She said her children were suffering from lethargy, migraines, fatigue, sore throats, running noses, sore eyes and came in wheezing after half an hour of play.

“This is a disaster,” she said.

“What it’s doing to them now… it might be five or 10 years time (that they have health problems), it’s pretty scary as a mum.”

The pair said it was still a matter of days before the fire was fully doused, and that tomorrow was a pivotal day in the battle with hot and dry conditions forecast.

However, they ensured there would be no handover of responsibility to GDF SUEZ until “we’ve got a fire that is not going to produce smoke or potential dust or ash over Morwell”, to raucous applause.

They also quashed questions over a lack of government funding being an impediment to the firefighting effort.

“We’ve got the resources we need and as far as I’m concerned it’s not about money,” Mr Ferguson said.

“Money is not the question… what we have got to do though is make sure we have the right skillsets. We have to select the people we use due to their skillset and knowledge.”

Construction, Forestry, Mining and Energy Union mining and district president Luke van der Meulen also addressed the audience, stating everyone in the hall had a right to be angry at a lack of government and regulator responsibility.

When the march reached Mid Valley, adults and children alike took to the megaphones to air their angst at the situation.

“No more lies”, “help us now” were among the more popular chants, while youngsters asserted “we don’t want to breathe this air”.

Mr Savige called for decontamination of the entire town to ensure all partiulates were removed.

Protest organisers have a petition in support of their demands available at bit.ly/1hKcNCe which as of last night had 1243 signatures.