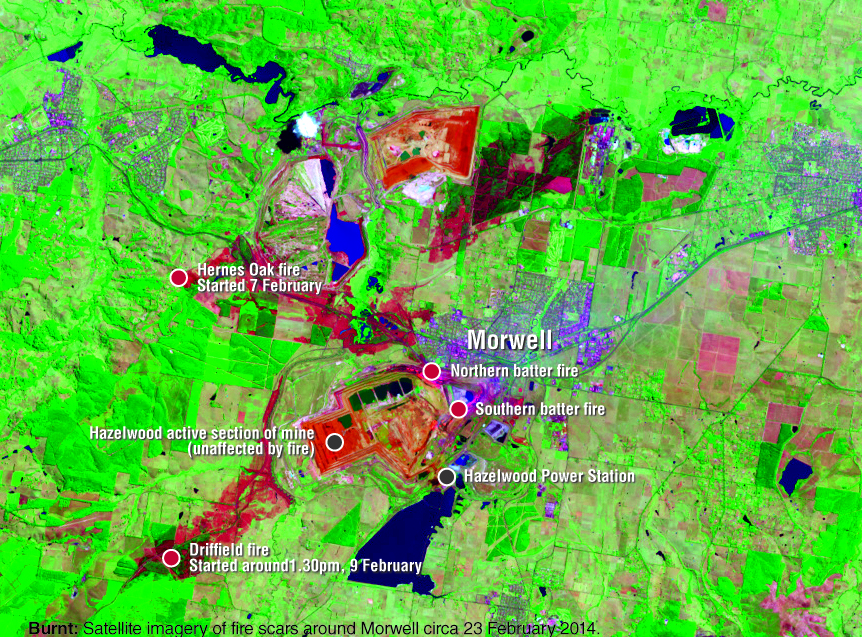 Doubt has been cast over official claims the Hazelwood open cut blaze was caused by an arson-lit fire in Driffield – a version of events spruiked by the State Government in the weeks following the blaze.

An investigation by The Express has found inconsistencies in the causal link between the Driffield and Hazelwood fires on 9 February, with a range of front-line testimonies and publicly available information suggesting the mine fire had in fact spread from a separate source.

While an arsonist’s suspected involvement in the Driffield fire had been reported within the first 24 hours, no causal link was ever made between the two until Victoria Police made a public appeal for witnesses 17 days later.

According to police, three fires were deliberately lit along the Strzelecki Highway near Driffield within a 15-minute window about 1.30pm, creating a blaze which progressed north-east along the highway into the Hazelwood mine.

However, the Driffield connection contradicted earlier official statements as to the cause of the mine fire; former incident controller Laurie Jeremiah had told The Express the Hazelwood blaze had spread from the Hernes Oak fire in north-westerly winds, before a major south-westerly change on the day.

The surprise announcement also created fierce debate among CFA firefighters and Hazelwood mine workers, who have questioned the plausibility of the position taken by Victoria Police.

“It’s complete nonsense – we were in there watching that (Hernes Oak) fire come down the (Princes) Freeway,” one mine worker, who did not want to be named, said.

“There were already spot fires in the mine by the time the wind change came through – that south-westerly (wind) just created a huge funnel effect and she took off like crazy on to the northern batter after that – we had no hope of getting on top of it.”

According to Bureau of Meteorology data taken from instruments at Latrobe Regional Airport, wind patterns changed from a north-westerly to south-westerly direction at 1.50pm Sunday, about 30 minutes after the police stated the arson-lit Driffield blaze had begun.

The Express has spoken to five mine workers who separately agreed fire was already in the mine before the wind change, which they said ruled out the possibility of the Driffield fire spotting from about six kilometres away against a north-westerly wind.

However, the workers’ recollections have clashed with timing suggested by a spokesperson for Hazelwood operator GDF Suez, who yesterday said spot fires were first detected in the mine about 2.30pm – one hour after the Driffield fire started.

At 3.55pm, an emergency warning was issued for the Driffield and Hazelwood areas for a “fast-moving, out of control grassfire travelling in a north-easterly direction from Creamery Road towards Hazelwood”.

The following morning, 10 February, the GDF Suez spokesperson told The Express while the Driffield fire had been of temporary concern for the power station and the active western section of the mine, the threat later subsided.

A spokesperson for Victoria Police did not answer a raft of questions about the Driffield/Hazelwood connection, stating only the Hazelwood open cut mine fire investigation “remained open”.

The Express understands the cause of the Hernes Oak fire, which started on 7 February, is still being treated as suspicious.

Meanwhile, frontline CFA volunteers who worked the Driffield blaze have also challenged claims the fire spotted into the mine, and official claims the Driffield fire “joined up” with the Hernes Oak fire to become the ‘Morwell Hernes Oak’ fire.

“There’s a lot of unhappy volunteers out there at the moment,” one CFA volunteer said in the first week of the Hazelwood fire.

“We fought our arses off to stop that (Driffield) fire, it never joined up with anything.”

Satellite imagery taken on 23 February shows a one-to-two kilometre gap between the northern tip of the Driffield blaze – where it was stopped along the Morwell river diversion due-west of the open cut – and the nearest burn scars from the Hernes Oak fire.

“If you look where the fire stopped and look at the grass on the other side of the river – there would’ve been other signs of spotting, but there was nothing in between; there were no signs of grass fires between Driffield and the mine at all,” another CFA volunteer said.

Despite resources being stretched across numerous fire fronts on the day, the firefighter said the Driffield blaze was contained about 9pm that evening.

CFA Gippsland regional director Mark Potter said CFA was yet to be advised of the cause of the Hazelwood fire.

“CFA are supporting Victoria Police to determine the cause,” Mr Potter said.

Meanwhile, The Express is aware of debate among the mining workforce as to whether fire had already started in the open cut, with claims an existing hotspot had flared up before external spotting entered the mine.

Renewed questions over the Driffield/Hazelwood link come ahead of the Mine Fire Inquiry’s official hearings beginning today, which will pursue the cause of the Hazelwood blaze in its first course of questioning.

Meanwhile, Labor candidate for Morwell Jadon Mintern has accused Premier Denis Napthine of using the Driffield/Hazelwood arson connection as a “convenient excuse to distract” the Morwell community in the face of tough questions during the Hazelwood smoke crisis.

During a visit to Morwell on 28 February, Dr Napthine faced a range of questions from journalists over the government’s role in mining sector regulation and responsibility, to which he repetitively referred to the Hazelwood blaze being caused by an arsonist.

“The fire was deliberately lit on some roadsides in an area which then caused the fire,” Dr Napthine said on the day.

“If those fires were not deliberately lit, you would not have the fire in the mine.”

In response to Mr Mintern’s accusation, a spokesperson for the Premier described the candidate’s comments as “appalling” and “astonishing”.

“If Labor thinks arson should be ignored or if Labor doesn’t have confidence in Victoria Police they should come out and say so rather than climbing into the gutter and slinging mud for their own political purposes,” the spokesperson said.