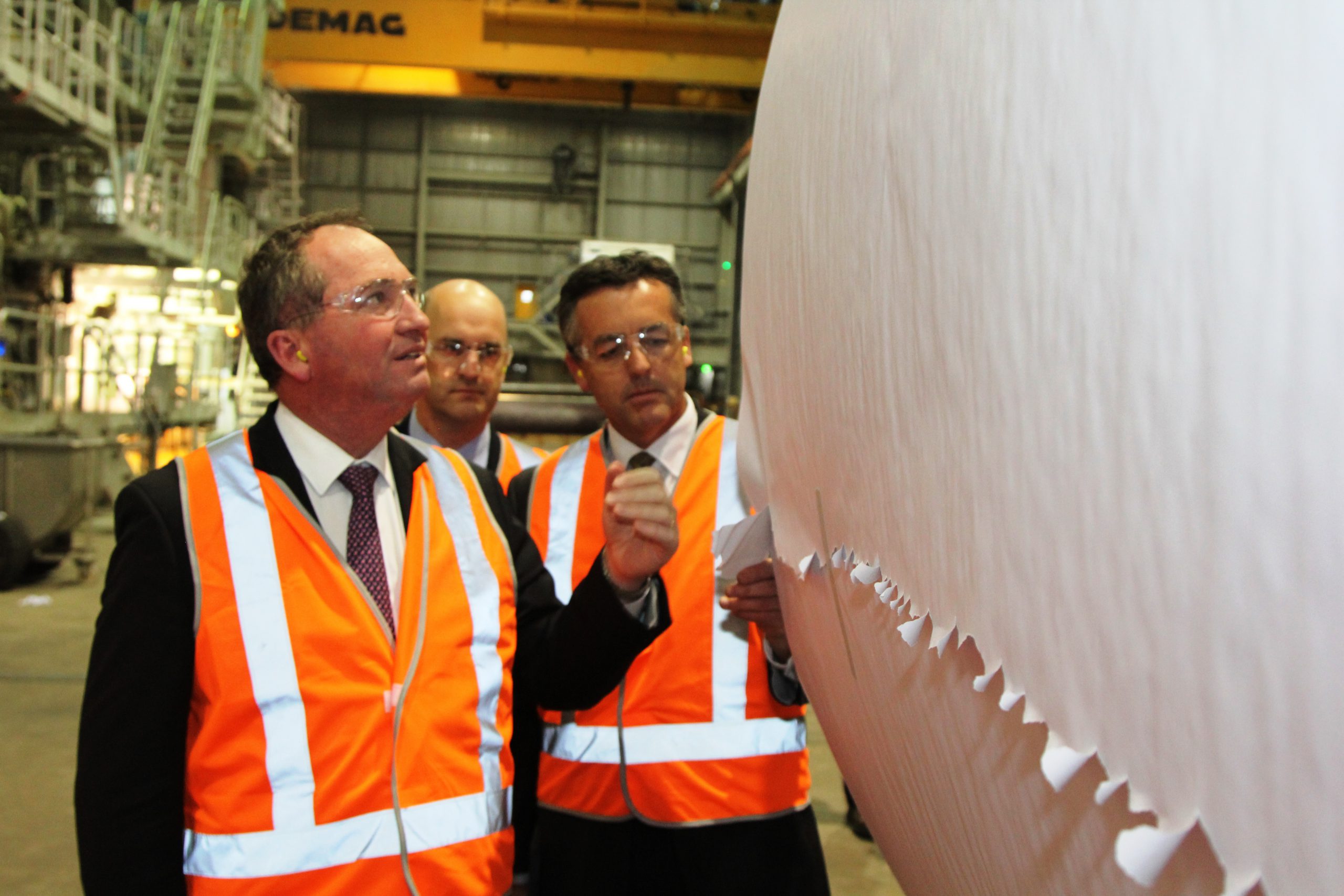 Federal Minister for Agriculture Barnaby Joyce was hit with questions from mill workers on Thursday about his department’s foreign paper supply.

During his visit to Australian Paper’s Maryvale Mill, the workers queried why Mr Joyce’s department sourced its stationery supplies from OfficeMax, who import paper from Germany.

While the department has a contract with the company until April 2015, Mr Joyce said if still in his position he would consider making the switch to Australian-made paper.

“He was non-committal straight up, he believes he has a nine month contract at the moment to run with OfficeMax,” Maryvale Paper Mill Construction Forestry Mining and Energy Union secretary Anthony Pavey said.

“We’re of the opinion that he could probably switch over from using German paper to using Australian paper anyway with OfficeMax.”

In addition to requesting the switch, workers hoped Mr Joyce’s visit would stimulate his interest in the mill.

“We’re trying to get him on-board for a lot of things to do with the future of the paper mill, long-term viability with the worry of gas prices going up and the timber sourcing,” Mr Pavey said.

“There may be a shortfall if we don’t start thinking ahead and that’s the idea of getting things on the way now so that plantations are getting in the ground.”

Mr Joyce told the Express in addition to learning the inner workings of the mill and liaising with employees, he used the visit as an opportunity to drum home that The Greens would “shut down the forestry industry”.

“My preference is always for Australian product, that is what I like and this is yet another battle we have with The Greens,” Mr Joyce said.

“They say don’t Reflex my forest but what they’re really saying is don’t employ Australian workers.

“It’s a two-pronged thing, I’ll do my best to try and make sure we use more Australian paper and I ask other people to take on The Greens when they want to shut down the industry.”

“It’s something you can keep doing for hundreds of years and the wealth potential of that land you’re harvesting is still going to be there.”

Mr Caffrey labelled Mr Joyce’s claims as “ridiculous” and said The Greens fought to protect old-growth native forests, rather than forests planted with the purpose of harvesting.

“It’s so ridiculous, over the years people like Barnaby Joyce have got a free kick by saying ‘The Greens are mad, don’t vote for them’ but really it’s got to the stage where ‘why not look at the Greens because our policies are sustainable, they are long term,” Mr Caffrey said.