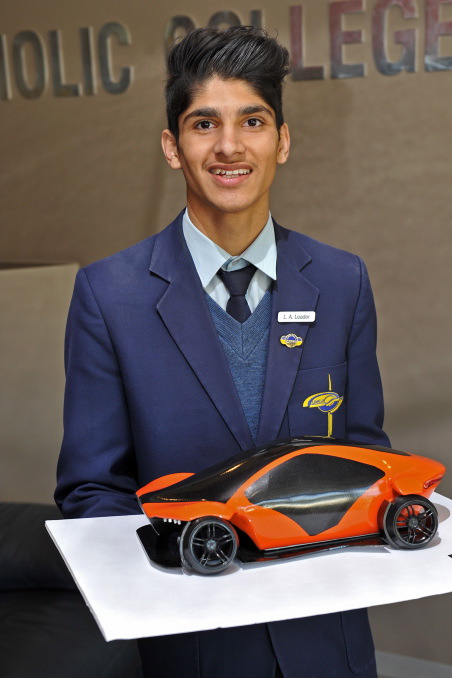 A 17 year-old Morwell boy has been recognised for his innovative automotive design by industry professionals.

Year 12 Lavalla Catholic College student Aman Bhatt was named the winner for the 2014 VACC Automotive Design Awards in the secondary category for his ‘RAPIDE’ car – an exciting mixture of an electric car with the power and style of a sports car.

Aman said he was trying to create something in between the electric Toyota Prius and a sports car with automotive technology looking into the future – fit out with glass doors and outboard wheels.

“There’s nothing in between, so that was the idea behind the design,” Aman said.

“I had a chat to the judges and told them what my design was about, and they liked the idea and the design.

“The idea was a sporty car that was friendly to the environment, but more people could afford it.”

They described Aman’s entry as the “complete package” with an interesting and clear concept which was relevant and well-considered in 2D and 3D form.

Aman said he made the model in his backyard shed by hand, using body filler and foam, while other entrants used 3D printers, CAD models, sketches and essays.

“I didn’t quite have the technology of other schools,” he said with a laugh.

Aman, who received runner-up at the competition last year, was also lucky enough to receive an internship at Ford.

“I learnt about sketching and designing, proper techniques about how to render a design as well as an introduction to CAD software,”Aman said.

“It was a great experience of how the real world works towards design. It was hands-on experience in the automotive industry.”

Aman, who has yet to gain his driver’s licence but already has an Audi A3, hopes to study industrial design and have a career designing cars.